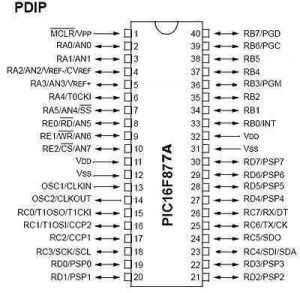 There are 5 ports that provide parallel I/O Interfaces to outside world PORTA, PORTB, PORTC, PORTD, PORTE

Each port provides 8 bidirectional digital I/O lines which are connected to PIC16F877A pins provided that alternate functions are not selected on that Port.

Eventhough Bidirectional at nay time the I/O line can either be INPUT or OUTPUT.

Step 1: Connection of LEDs With a Port 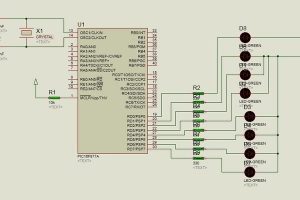 Let us assume that 8 LEDs are connected to 8-pins of PORTD of an PIC16F877A chip.

We want to glow eight LEDs alternately. [If ‘1’ is sent, the corresponding LED glows]

And they will toggle at every 1 sec and it will be repeated continuously.

Light Emitting Diode (LED) is a special diode that emits light when electric voltage is applied to it. It is a common electronic equipment used in many devices for indication purpose.

Step1: If we want to read (in) data through a pin of a port, the corresponding bit of TRISx Register has to be set to ‘0’.

Step 2: Whatever data is in that pin of the port the data will appear in the corresponding bit of TRISx register.

Step 3: Each pin has a provision of connecting a pull up resistor internally. If we want to connect that resistor, we have to write ‘1’ to the corresponding bit of PORTx register.

Note: At START UP or UPON RESET, TRISx register contains 0x00. That is the port remains at Input state. But if it is used as OUTPUT at one stage of program, afterwards, we can not read data from a pin if we do not complete step 1.

AllDigital ‘all ports goes to digital

If PORTD.7 Then Goto goright ‘when RD7=1 then goto loop right shift

If PORTD.0 Then Goto goleft ‘when RD0=1 then goto left shift loop

Source: How to use input output ports 8051 microcontroller|LED blinking