Microcontrollers are standalone chips since they have memory and processor embedded. The integrated memory of microcontrollers store embedded code and other temporary variables for the execution of program. CircuitsGallery published many microcontroller tutorials and PIC microcontroller projects. Sometimes we may use non-volatile memories (i2c devices) with microcontrollers in case of storing permanent data. In this article I am gonna explain how we interface an external memory i2c microchip with PIC microcontroller. For that I took Microchip’s 24LC64, which is a 64 Kbit Electrically Erasable PROM also called I2C. This i2c tutorial will definitely serve you while doing i2c projects.

LCD module is used to display the data. Program progresses by writing data to the 24LC64 i2c memory chip then reading it and displaying on LCD screen.

Now let’s see the circuit diagram showing how to use i2c with PIC.

How I2C Interface Works with PIC 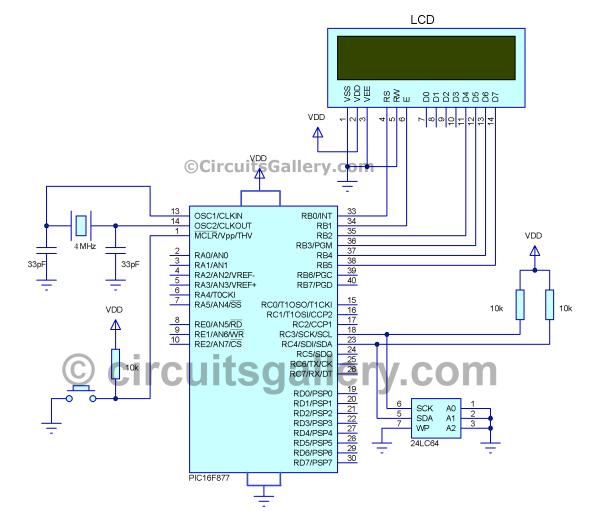 For more detail: How to Interface I2C External EEPROM 24LC64 to PIC Microcontroller