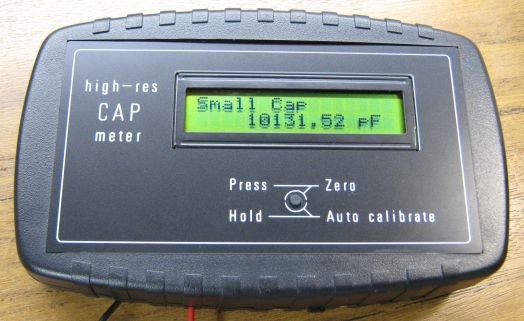 How it works
For absolute simplicity I used a PIC16F628. The oscillator uses the PICs internal comparator so no second IC is needed.

The oscillator is an RC comparator oscillator that switches between 1/3 Vdd and 2/3 Vdd, this is a proven system and the frequency is reasonably unaffected by small changes in the 5v Vdd.

The three 1k5 resistors (green) set the threshold voltages at 1/3Vdd and 2/3Vdd when the comparator output switches. (The PIC is a better comparator than many dedicated comaprator ICs as its output has good push-pull low-Rds FETs).

The final stage is the PIC timer, that measures the oscillation period very precisely compared to the PICs xtal. And a math calc is done to scale the period to capacitance in farads.

The PIC measures the RC oscillation period by using the PIC’s internal hardware capture (CCP1). The PIC xtal is 16MHz so the PIC timer runs at 4MHz.

It adds consecutive captured periods until there is a total accumulated time greater than 2 million counts (>0.5 second). The only error can be the edge error for the first and last capture, so the error is limited to 1 part in 2 million at each end, a total possible error of 1 PPM (1 Part Per Million).

Now it has a precise captured total of periods the average period is determined by dividing the total period with the number of periods captured. As the total is always just over 2 million it is scaled up to 2 billion before the division, to give a lot of accurate decimal digits after the division.

All the math and scaling systems have been chosen to give the best precision possible from the 32bit unsigned long variables used in the firmware, without resorting to float or 64bit variables that would have needed a larger and more expensive PIC.

There are three display ranges;

In the pF display mode the display accuracy is about two final digits; +/- 0.02pF.

In the nF and uF mode the display accuracy is better, at +/- 1 final digit. 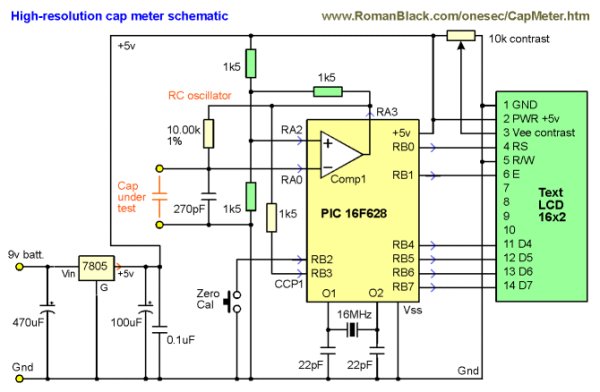 The “real” accuracy depends on the internal calibration, with my PIC, 10.00 kohm resistor and 16MHz xtal the calbration is accurate to better than about 0.2% of the capacitor value, based on some test caps.

You should be able to improve this further by using a trimpot in series with the 10k resistor (ie; 9.75k resistor + 0.5k trimpot) and trimming for much better than 0.2% accuracy by using some precision test caps. However the cap meter was designed for better than 1% accuracy as a convenient hobbyist build without needing any special equipment or special caps.

The benefit of having the high display resolution (lots of digits) is that it allows caps to be compared to each other, and allows fine resolution capacitance changes to be seen, especially things like thermal changes and variable capacitors.

Housed in a tiny 1.6×1.2-mm, 0.6-mm thin package suitable for wearable electronics and other space-constrained battery-operated applications, the SC563 low-dropout...