Robots can be used in many applications in industries, military, domestic. One of the major uses of Robots is an asset to human beings. Whether it is any kind of hazardous situations like a fire breaking out or a place full of landmines, Robots can easily work out a way out of these problems. So let us see these two types of Robots – A Land mine sensing Robot and a Fire Fighting Robot

How to Sense Land Mine with Robots?

One of the traditional and conventional ways of mine detection is the use of trained personals that manually search for metals or mines using a metal detector. However this is unsafe and expensive and also slow.

To overcome this problem a far more advanced system is preferred. 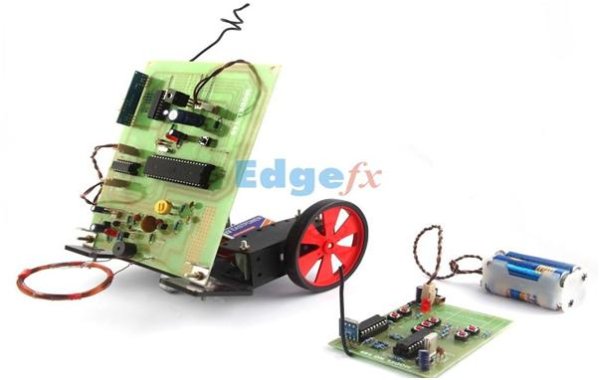 A Couple of ways to Detect Landmines:

Before going further into details about the second type – i.e. the robot with metal detector, let us have a brief recall of the two important terms – Land Mines and Metal Detector.

A Land mine is an explosive device placed deliberately beneath the ground which explodes when triggered by pressure. According to a statistical report there are about 100 million landmines in 70 countries across the world. A landmine once placed can work upto 50 years. Isn’t it dangerous!!

A basic metal detector works on the principle of faraday’s law of induction. It basically consists of a coil which is energized to develop pulsating magnetic field around it. When the coil comes in vicinity of a conductive element like a metal (a mine), an electric current (eddy current) is induced in it. The induced eddy current causes development of electromagnetic field around the metal, which is retransmitted to the coil which develops an electric signal that is analyzed. Greater is the distance between the coil and the metal, weaker is the magnetic field.

The robotic vehicle consists of the following units:

How does the Robot Works:

The LED starts glowing and the buzzer starts ringing. Thus when a metal is detected, the buzzer alarm will start ringing and the LED will glow. 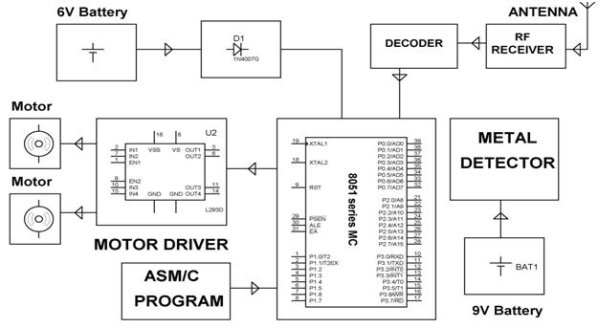 The simple prototype can be controlled using RF communication, which is a short range communication system. The commands are transmitted using a transmitter and received by a receiver embedded on the robot circuit to control the robot motion.

The transmitter consists of a set of push buttons like forward, back, stop, left and right which are pressed to provide motion of the robot in any desired direction. The push buttons are connected to input port of the microcontroller. The microcontroller on receiving these signals develops a corresponding 4 bit signal in parallel form across another I/O port, to which an encoder IC is connected. The encoder converts these signals to a serial form of data. The RF transmitter modulates this serial data, which is transmitted through the antenna.