DIY 1GHz Active Probe For Under 20$ 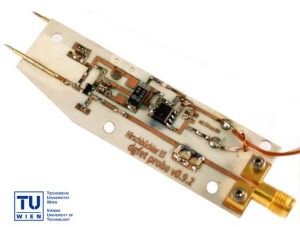 So, you’re an electronics hobbyist and want a 1GHz* active probe, or a professional and tired of blowing your 2000$+ active probe in sketchy circuits when all you wanted to know are the whereabouts of some RF-signal?

Then stay with me!!

This Instructable will show you how to build a 1GHz* Fet-based Active Probe, the Fetprobe, for about 10$*, provided you have access to an electronics lab. It is based on an Elektor-magazine article (see the pdf’s addendum, section literature in my thesis) beside some other designs. However, as topic of my bachelor-thesis I wanted to find out how good these designs really are and how far one can push them.

If you go down this road, you need access to a lab that is equipped for some RF-fun, a cheap way for ordering RF-components and some rapid prototyping capabilities. Options some DIY-electronic-aficionados may not have. Although, my Bachelor-thesis comes with a lot of measured performance data, you will get pretty similar results if you stick to this tutorial.

In case you want to learn some more and don’t mind a more scientific approach than have a look at my thesis included as PDF-file in last step.

Equipment needed to build this probe:

Components you need to get:

add. Equipment needed to design & develop your own probe:

PCB mill, capable of SMD boards 125µm track-gap or similar etching process
VNA (Vector Network Analyzer)
swiss-army-knife RF software like AWR Microwave Office from National Instruments (layouting, spice-sim, RF-sim)
*: handles 1MHz-500MHz really well, usable up to 1GHz though (if you can accept a bit of dispersion and amplitude error, as shown in the S21-graphs in the last step

**: means you may need a membership in a laboratory, or acquire some people’s affection who do (i.e. via cold beverages). Also, the 20$ price tag suggests you only need to buy the special components, not the standard things which lie around in an RF-lab anyway.
Step 1: Motivation
Picture of Motivation

What is an active probe, anyway?

Assume you got a device you want to repair, and may encounter signals between 1MHz and 1GHz.. just stick in your beloved passive probe that came with the oscilloscope, no worries?

First and foremost, even if your probe is good for the RF-signal’s frequency you try to investigate, it still adds some capacitance to that trace you are probing. Some circuits may not like that and this is where the active probe comes to the rescue. Here, the amplifier in the probe’s head drives the cable and and other unavoidable capacitances so your circuit doesn’t have to.

However there is more to it:

A passive probe, as shown in the diagram, uses a variable RC-element (labeled “comp”) in its input path to compensate the transfer function (S21*) for lower frequency applications.

While that works for a certain freq. range, for higher frequencies (~200-800MHz+) the elements cannot be approximated as lumped elements anymore, and the compensation breaks down.

Also, a ground lead, especially a long and curled up one can prove dangerous, because it adds unwanted inductance, and may pick up some RF as well. That’s why you should always keep it as short and straight as possible, or remove it at all and add a more direct ground connection, like the RF grounding-spring to your passive probe if you are working on RF-circuits. My active probe has the same kind of spring-loaded tip for the GND connection as for the RF input.

So, what can this DIY active probe do?

How does it do that?

*: The general term for resistance is impedance, and in the context of how much input impedance a measurement tool has, the input reflection coefficent S11 comes in handy (smaller = better).

How to design such a device?

In essence, it has to be an impedance converter: High impedance (less power flowing away) for the DUT (device under test), controlled impedance (nice strong signal, low distortion) for the measurement instrument.

This can be based around an operational amplifier or a mosfet, but for me the fet-solution turned out to be better (see thesis-pdf in last step).

Above, you can see the schematic* of the Fetprobe, the fet-based Active Probe.

A very small input capacitor C_in in the input path guarantees that only veeery little current gets away from the DUT, and next to it a 10M bias-resistor ensures that the mosfet operates in its ideal DC-working-point (linear area of input-output relation. signal now is AC+DC). Now, the small signal itches the double-gated fet, which in turn creates a stronger signal. Followed up by the resistors R1 and R2 which determine the fet’s gain and help to better transmit waves over the coax (output impedance matching), especially on a 50Ohm system (typically used for RF-measurement equipment). Then, the DC-part of the signal (introduced for the happiness of the fet) gets chopped off by the capacitor C_out (not part of original signal).

It has to be noted that these values most likely have to be tuned separately for each Active Probe replica, as the resonance and the gain seem to vary due to manufacturing (your soldering, as well as the chip itself**).

*: Showing only the functional parts, no parasitics, they are described in the attached pdf.

**: Something like this could be automatically regulated by other fets/transistors, but the design goal “simplicity” forbids doing that (as well as the notion that every additional component, especially active ones, often introduce additional problems, and it’s very hard to get that all under control, pricey components inclusive. That’s part of why comparable professional tools may cost a hundredfold).

attached pdf’s: how the schematics look like in NI’s AWR

How to turn the schematic into hardware?

Only then, as you know that your circuit actually works, the full-blown design (i.e. with its own voltage reg. instead of having a labPSU dedicated to it) makes sense to be implemented. Don’t trust any spice-simulation over a real PCB too much, especially if you cascade many functional instances!

The other pictures show the 3D-View in NI’s AWR, as well as the real PCB.

Note that the RF-path is implemented as a 50Ohms line (Wave impedance, not resistance!) and kept clear of other traces for about one trace width or three times the substrate thickness, whatever results in the higher separation. The input-path kept as short as possible, the ground-plane is removed below it and the FET to get rid of parasitic capacities. Note that this first section leading up the FET is not impedance controlled, we want it to be as high impedance as possible to not disturb the circuit we are probing.

At the end of the day, you want to hold it in your hands or mount it to a stand, so two copper clad FR4-circuit boards (w. Kapton-tape finish) where attached as housing. They not only prevent your hands from touching the circuit, the standoffs provide some extra clearance. Therefore, prohibit interfering with the measurements since the input-path’s 0.5pF and 10MOhm are in the same ballpark of what your fingers might do! Using FR4 circuit material as enclosure was just an easy way of utilizing the PCB mill to build the housing. If you don’t have one, make something similar from sheet metal or even put it in a plastic case. However, be sure everything stays right clear of the business end to avoid unnecessary stray capacitance.

To supply power, the Fetprobe can use everything from 12 to 30 Volts (that is, its voltage regulator can handle). Note that the hardware implementation also features a few extra bypass capacitors (bias, supply of fet) and a few zero-Ohm-links, where protection diodes could go, depending how careful you are about the polarity when you are hooking it up. When choosing caps for the supply be sure to always team up different kinds in parallel. E.q. 2.3µF electrolytic and 100nF ceramic. This helps with overcoming the potentially poor RF performance of the electrolytic caps.
Step 4: Building & Debugging
Picture of Building & Debugging

Now, let’s get our hands dirty!

Get the PCB*, put the components on, solder them.

Piece a’ cake? Let me put it this way: some of the components are as big as a flea, literally. Unless you have eagle-vision or much experience, a microscope or a nice desktop magnifying glass is mandatory. Some small clamps, a watchmakers vise or other random tools of the right size (i.e. pliers) can help to hold stuff down, like the PCB.

The transistor you are handling is a very delicate thing made for detecting minute signals, no wonder it will take damage from some 1000V worth of static discharge. Make sure your microscope, vise and most important you are grounded! Ideally, connect yourself with a 1-10Meg resistor in series to ground (If you ask ebay for grounding straps they will happily supply one for a few bucks). This contraption will absorb the power of any discharge (preventing its dissipation inside your electronic devices). Always touch these “grounded” objects before touching the PCB, or something may blow without you noticing at first.

Of course, for proper instructions, look for an in-depth Instructable or ask colleagues, but here are some things I struggled with / remember doing:

prepare the solderpads via scratching them a little, i.e. with a glass-fibre brush (SMD gear)
use the thinnest solder possible (i.e. 0.3 mm)**
put additional flux on the pcb, it helps (even if your solder has a flux-core)
too much solder is too much, especially in the RF-path: If a blob forms, remove it partially with solder-wick, or unwanted capacities will give you headaches (you only want a smooth slope from the component’s lead to the pad, no mountain of solder)
too little may fool you: since too little solder in the RF-path may result in an open circuit which equals a capacitance, it’ll probably still somewhat work, but give you variable results!
don’t be fooled into assembling everything at once, i.e. test the power supply section BEFORE you put the main device (i.e. the fet) on the board, just in case the v-regulator’s resistors got swapped and now it produces an inadequate voltage, or there’s now power at all, or something (see notes on picture with green vise)
don’t stress the tiny traces too much: They will rip, and better pray its not the RF-path you just killed (tough, it won’t help if you did, so better be safe than sorry). Use a tweezers-style desoltering-tool or two solder-irons at the same time in case you need to remove a component.
play the touchy-game, if the graphs look strange: By putting your fingers anywhere on the circuit, you may be able to detect faulty solder joints, as well as how a little additional parasitic capacity influences the setup (here: low voltages & very low currents = little power => no danger).

For More Details: DIY 1GHz Active Probe For Under 20$

Searching for a reliable wireless solution for your project can be a real pain if you're not familiar with current...