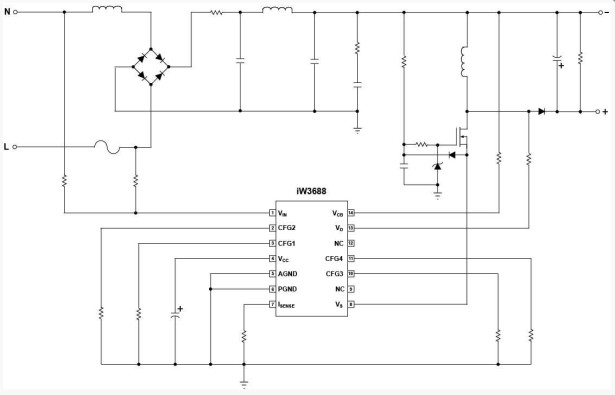 Instead of a bleeder circuit (see below) Dialog has integrated digital algorithms that modulate primary FET switching to draw extra current during dimming. This ensures the input current “continuously”, said the firm, stays above triac biasing thresholds during forward conduction, eliminating the need for an external bleeder circuit.

iW3688 is a single-stage driver designed for applications up to 20W, including A-style, BR, candle, GU10 and PAR bulbs, and T8 tubes.

On-board dimmer detection allows the chip to work with leading-edge dimmers (R-type or R-L type), trailing-edge dimmers (R-C type), and smart dimmers. Dimming range is claimed to be 1% to 100%, but this is unlikely to be with all dimmers.

In no-dimmer mode, the chip operates in quasi-resonant mode to increase power efficiency and reduce EMI.

No data sheet has been released, only a product brief, so few numbers and little further information is available.

The firm claims the chip can be used in external lighting ballasts, and in both buck-boost and fly-back topologies, inferring isolated operation is possible.

This project was inspired by a position i was trying to get in monitoring plants, and thought it would be...