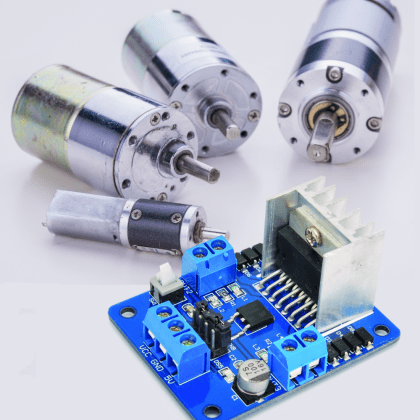 It can be controlled through logic levels to set the speed and the direction of the rotation of CC brushed motors and stepper motors; outputs have LEDs indicating the rotation direction.

The circuit board we are presenting this time is based on the dual-bridge driver L298N, in a traditionally mounted version in a Multiwatt container with 15 staggered pins; it has two terminal blocks for attaching to DC motors or the coils of a bipolar stepper motor and a terminal block for powering logics and motors. Each of the two output channels of the circuit can provide a maximum current of 2 A, which is enough to drive two 2 A direct current motors or a bipolar stepper motor absorbing 2 A per phase.

Now that you have an idea of the circuit performances, let’s get down to it by analyzing the circuit diagram, which is based on the L298N driver by ST: it is a dual H-bridge BJT driver which can be entirely controlled through the EN (enable) and IN (direction) control pins. Each section of this component is made of an NPN bipolar transistor bridge and each bridge is made of two halves in which the BJTs are connected following an almost complementary symmetry, that is the positive-connected transistor is connected to the collector and the bottom one is connected to ground via the emitter (the bridge structure can be seen in picture); therefore, the output is found between the emitter of the positive-connected transistor and the output of the ground-connected transistor.

for more detail: A DC Motor Controller with Control Leds