‘Caller Line Identification’ displays on a (2×16) LCD the phone number of the person who is ringing you, before you even answer.

When start up the first few seconds appears the version number in the display.

Direct after programming the PIC stays in TEST-mode.
You can recognize this on the word TEST which appears continue on the right on the second line in the LCD.
(Disabling this see text)

After power up, appears the number of stored telephone numbers and burns the ‘new numbers’ LED, if it was also on before the power failure.

‘Caller Line Identification’ displays on a (2×16) LCD the phone number of the person who is ringing you, before you even answer, this number stays on the LCD till it wil replaced by a new received phone number OR if the button is pressed.

With the button you can ‘leaf’ trough the phone numbers.
The second line displays how many phone numbers are stored in memory.
A (a)new received phone number is marked in the display with *N*, it disappears when it’s number has been seen.

Max.12 10-numerals telephone numbers can stored in PIC’s EEPROM.
When the memory is full, a message is displayed and the backlight and LED blinks slow.
There still can appear new numbers on the display, but these numbers are not stored in memory anymore.

(However, when a (new) received number is not seen yet, erasing is not possible.)

The memory is empty again. 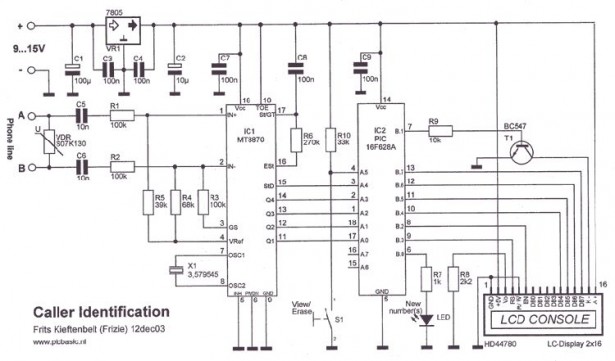 You can also enable TEST-mode when you press the button while you switch the power on.

The LED burns when new number(s) are received and goes off when all the new numbers has been watched.
This LED blinks fast for a while when a received number is already stored in memory.
By a phone call or a push on the button the backlight from the LCD burns for about 30 seconds.