The PIC Based servo controller is a small project I designed to allow me to control some robotics. I then decided that I should publish it as it may be of interest to other people. 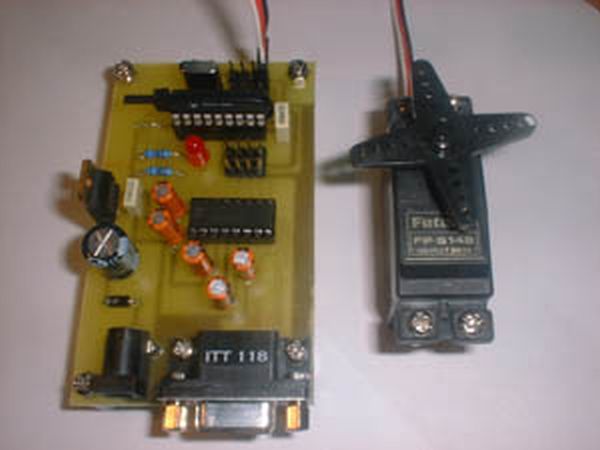 The Servo Controller uses a PIC16F84 microcontroller from Microchip to drive servo motors and digital outputs. It receives commands from a host computer via a standard RS232 serial interface.

You can download the PIC program which contains a HEX file which most PIC programmers can read; and a PIC Assembler code (ASM) file if you would like to see how it works or modify it.

I used the free PIC assembler from Microchip, the manufactures of the PIC range of Microcontrollers.

Several contributors have provided code samples that you can use to drive the PIC Servo project.

Here are some Acrobat files for the Schematic, Single sided PCB and Overlay artwork:

You will need an Acrobat reader available for free from www.Adobe.com to view and print these files.

Note that the PCB is a single sided board, about 88 mm by 53 mm (3.5 inches by 2.1 inches). I have provided the track patters viewed from both sides of the board so you can choose the one that suits your method of production.

I have been asked for a version that will control eight servos, so I have altered the code to support this.

To control the servos and outputs we need to send commands to the PIC. Some of the commands are single byte commands; some however require two bytes.

The command byte is split into two nibbles (4 bits), the upper one defines the command to execute and the lower defines the channel (which servo or digital output) is to be affected.

Currently, the software recognises only channels zero, one, two and three. The following are the commands and their numerical value. To build command bytes add the command value to the channel number.