Basics of the SPI Communication Protocol


When you connect a microcontroller to a sensor, display, or other module, do you ever think about how the two devices talk to each other? What exactly are they saying? How are they able to understand each other? 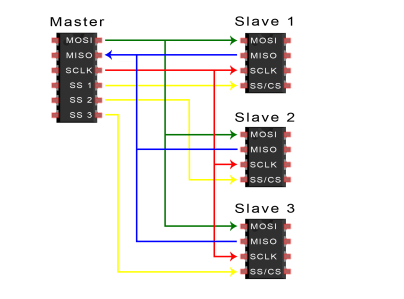 SPI, I2C, and UART are quite a bit slower than protocols like USB, ethernet, Bluetooth, and WiFi, but they are a lot more simple and use less hardware and system resources. SPI, I2C, and UART are ideal for communication between microcontrollers and between microcontrollers and sensors where large amounts of high speed data don’t need to be transferred.

SPI is a common communication protocol used by many different modules. For example, SD card modules, RFID card reader modules, and 2.4 GHz wireless transmitter/receivers all use SPI to communicate with the microcontroller.

One unique benefit of SPI is the fact that data can be transferred without interruption. Any number of bits can be sent or received in a continuous stream. With I2C and UART, data is sent in packets, limited to a specific number of bits. Start and stop conditions define the beginning and end of each packet, so the data is interrupted during transmission.

READ  OpenVPN VPN Protocol Settings: What You Should Know

Devices communicating via SPI are in a master-slave relationship. The master is the controlling device (usually a microcontroller), while the slave (usually a sensor, display, or memory chip) takes instruction from the master. The simplest configuration of SPI is a single master, single slave system, but one master can control more than one slave (more on this below).

For More Details: Basics of the SPI Communication Protocol

Description It is a low cost dimmer circuit for adjusting the light brightness of incandescent, Halogen Lamp, Light Bulb load...