We built a miniature recording studio using the PIC32 that allows the user to record a short soundtrack, play it back, then layer on additional sounds. We chose to support sounds for three tonal instruments: piano, guitar, and bass, as well as eight unique drum sounds. The user can play a full octave on each of these instruments, but not flats or sharps. This design choice balances the limited capabilities of the PIC32 with giving the user the ability to create complex sounds. We also have a microphone that the user can use to record custom sounds. The user can use the recording and playback modes separately. While recording, the notes played by the user are saved to be played back, and in playback mode the recorded sounds are played through a speaker to the user. The user can also playback and record at the same time. The system synchronizes the two if they are happening at the same time so that the playback begins while the system starts recording. If the user starts recording during a playback, the current playback finishes, and the recording starts at the beginning of the next playback. If the user starts recording while not playing back, there is a countdown from 3 to allow the user to prepare before the recording starts. In addition to the progress bar, which shows the progress through a recording or playback, we also have a small red circle that displays when we are recording. There is also support for deleting the current recording allowing the user to start a new song without resetting the whole studio. The recording studio also has a visual component in a menu that indicates to the user what instrument they are using, toggling playback mode, and deleting the current recording. Recording mode is toggled by a separate button which starts recording with any of the instruments or the microphone mode selected. The recording studio can save about 2 seconds of sound, which allows the user to record a full four beats at 120 beats per minute. This gives the user enough time to create interesting layered sounds.

Like most projects in Microcontrollers, we begin by breaking the overall task into smaller ones. Also like in previous labs, we will place the smaller tasks in threads so the system can be responsive and multitask successfully. The high level tasks are as follows:

There were 3 major hardware components involved in implementing our project successfully: the button, microphone setup, and speaker circuitry.

We used push buttons for 2 main purposes. 8 buttons were used as our keyboard so the user could play 8 sounds (an octave) for each instrument. 2 more buttons were used in the user interface, one was used solely to toggle the menu options while the other alternated uses between toggling recording and playback or selecting delete depending on the current mode. We enabled pulldown for all the appropriate pins on the board, as we’ve done in previous labs. The schematic below depicts the schematic for connecting a single button to the board. A similar circuit was used for all 10 push buttons.

Initially when we were trying to find 10 available I/O pins on the PIC32, we struggled a lot. We didn’t pay enough attention to our pin assignments and unknowingly connected 2 buttons to pins that were in use by the TFT. Thus, these buttons were being read as always pressed and our project was outputting constant noise. At first we mistook this sound for actual noise and we thought about trying to filter the noise. However, after we realized our error we essentially tried every possible pin assignment and finally reached a satisfactory pin assignment, as listed below. The keyboard buttons are numbered left to right as they would appear from the user’s perspective.

We used a microphone which we acquired from lab. The microphone was set up to receive input sound from the user and feed it to the board through ADC. The output of the microphone was too small, so we implemented a voltage divider and non-inverting amplifier on the output of the microphone before wiring it to ADC. Since the intended use of our microphone was for a person’s voice, we chose appropriate RC time constants to allow those frequencies to pass. For our amplifier, we started out with a gain of 20, but we chose to increase our gain to 100 so the waveforms would reach their full amplitude from -1.5 to 1.5 volts. This did cause some clipping to occur when sounds were very loud into the microphone, but as long as the mic is used from a few inches away, this is not a problem. An oscilloscope screen depicting the unamplified and amplified microphone output is pictured below. This image does show some clipping because we tested the mic by tapping the mic head, which is very loud in the mic. 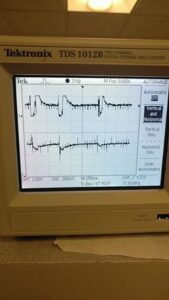 We were getting an audible amount of noise from our microphone when we recorded its sound output. Our first attempt to fix this was to fix the wiring and isolate the microphone from the power cables as much a possible. Unfortunately this didn’t significantly reduce the noise. We also tried various high-pass and low-pass filters outside the typical speaking voice range to try to eliminate noise. Yet the best result we could achieve was an odd clicking sound in place of the noise. When we fully tested our projects functionality, we discovered the in comparison to the sound from the various instruments, the noise from the microphone recording was very unnoticable, so we decided to leave it as is. The schematic of our finalized microphone circuit is depicted below. 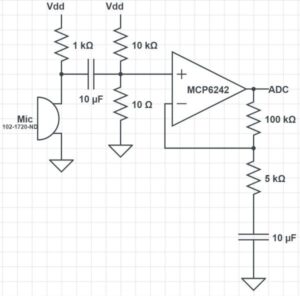 Our breadboard with the completed circuit is picturized below, however since this picture was taken after the breadboard was mounted under the Recording Studio, it’s hard to see clearly. 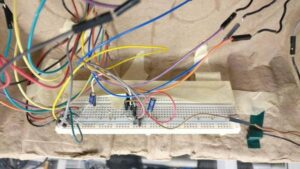 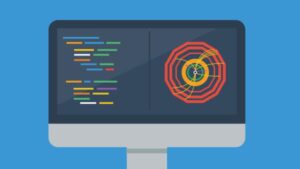 To create our sounds, we saved sound files as a single array and wrote the data of the array to the built-in DAC of our development board. The DAC output was connected to the speaker as outlined in the hardware design section. The vast majority of our code was in the file brainstorm.c. In this file, we get input from the user and then play the appropriate sounds using SPI in an ISR. This separation of code into header files made it easier to change our sound files during development as we found ourselves frequently editing the sound array. The following subsections describe in more detail the purpose of each file and how they work.

We searched YouTube for people playing C major scales with guitar, piano, and bass. These notes were then clipped to a relatively short length (about 0.05 seconds), and then put on repeat for playback on the device. For the drums, 8 different diverse drum sounds were selected, about 0.5 seconds each, and when in drum mode they are played once.

The sound files were clipped using the audio editor audacity, and then they were made into header files in MATLAB, after resampling to 8khz. 8 khz was selected to minimize storage space usage on the PIC. The MATLAB script then adjusts the range from [-1,1] to [0,256), and rounds to the nearest int to fit the unsigned chars range.