The design is kept simple with each channel being directly driven from a PIC I/O pin.  On board LEDs allow operation to be monitored while the power MOSFETs enable the board to control LED arrays and modules at currents up to 2 amps. 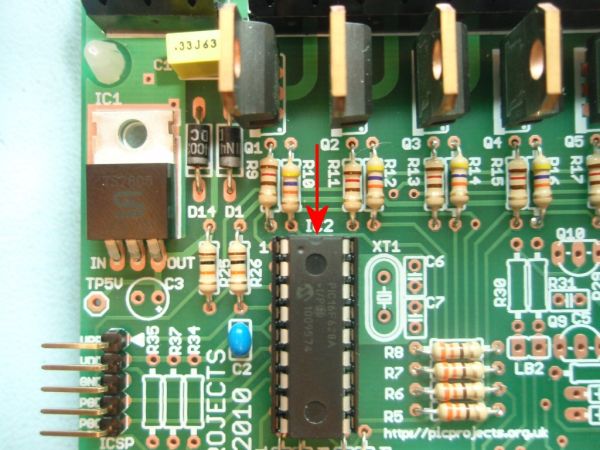 The heart of the LED chaser is the PIC 16F628A microcontroller, IC2. The program that runs on this chip controls the LEDs / MOSFET drivers attached to the output port pins.  Resistors R1 thru R8 limit the current through LED1 – LED8 to a safe level that won’t damage the PICs I/O ports or LEDs.  These LEDs are provided to monitor the main channel outputs, they can be omitted them if this feature isn’t needed.

Resistor R25 provides a pull-up for the input connected to switch S1.  R26 pulls up the PIC’s MCLR reset signal during normal operation while allowing the input to be raised to 12.5 volts during in-circuit programming.  The ICSP header provides connection for an ICSP programmer such as a PICkit2 making it easy to reprogram the PIC without removing it from the PCB.

Power is supplied to the circuit through the 3-way terminal block and must be smooth DC between 9 and 18 volts.  The PIC requires a precisely controlled 5 volt supply and this is provided by IC1, a 7805 3-terminal, 5 volt regulator.  Typical current drawn by the circuit with all LEDs on is only around 100mA so the voltage regulator doesn’t require any additional heatsink. Capacitor C1 stabilizes the regulator.  Capacitors C2 / C4 are used to decouple the 5 volt power supply to the board.   Diode D1 protects the circuit from accidental reverse polarity of the input voltage.  Diode D14 protects the regulator and is only really needed if you will be using the ICSP feature (doesn’t hurt to fit it anyway)

The power output stage comprises eight STP36NF06 N-Channel MOSFETs.  These are logic level devices with a low (logic level) gate threshold making them suitable for driving from a PIC output.  The 120R gate resistors limit the current during switching, the 47K gate pull-down resistors prevent the MOSFETs from turning on during power up and also from ESD (electro-static discharge).

Although rated at maximum of 30amps and 60 volts source/drain voltage, since the MOSFETs are being used without any heatsink do not exceed 2 amps per channel.  In addition to this the connectors and PCB track sizing also limit the maximum current per channel to 2 amps.
DO NOT EXCEED 2 AMPS per CHANNEL