A few months ago I wrote a blog post about the chipKIT Basic I/O Shield and used Analog RBG Strips to demonstrate the the open drain FETs. 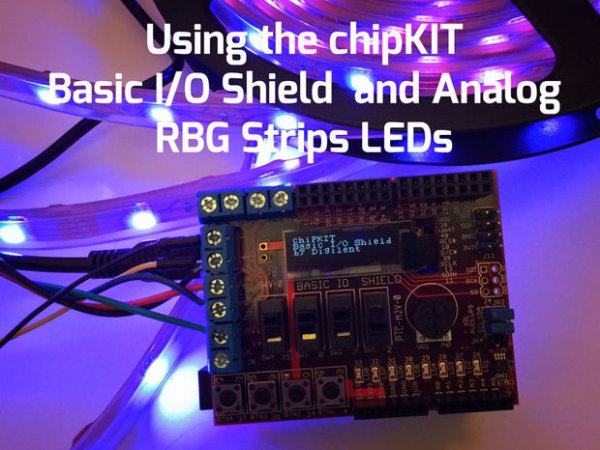 This post is to give details on how to wire up the strip LEDs to the I/O Shield.

You should already know how to program MPIDE before using this Instructable. 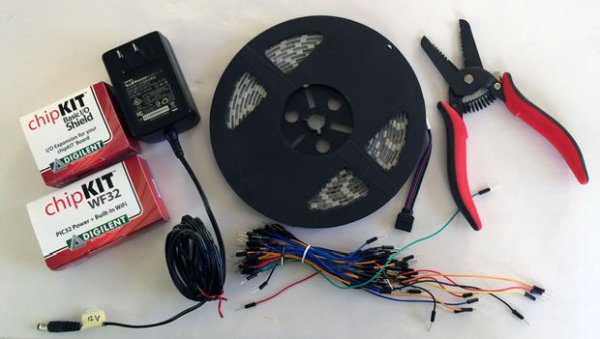 Step 2: How Many Inputs Does Your Strip of LEDs Have? 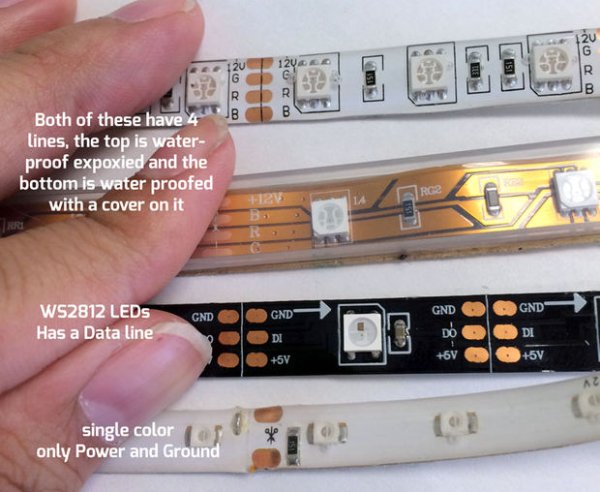 RGB LEDs are fairly easy to get a hold of, but there are many different options out there.

The top 2 in the photo are both RGB LEDs.

You can see that although in different order, they have 4 inputs and have R, G, and B and a power line.

Step 3: What Will It Take to Power Your Strip? 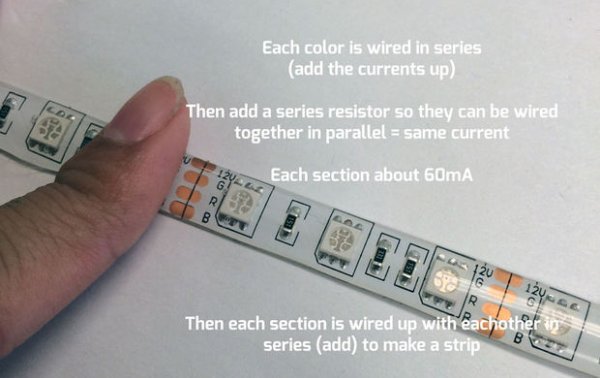 Once you establish that you have the correct LEDs, then it’s time to think about powering the strip.
There are a couple of different ways to power your strip. In the video here, I used a variable power supply. However, most people will choose to use either a wall-supply or batteries. Either way, you will need to choose a power supply that has enough voltage and current to run them.

What are we powering?

RGB LEDs are basically 3 LEDs in one package (the ones that I have are 5050 SMD).

Each group of 3 LEDs shares 3 resistors for each color group.

The LEDs I am using are common anode.
Translates to meaning that all of the LEDs share a common + power source, in this case is 12V.
So, a 12V power supply is needed, but we still need to address current.

LEDs depend mostly on current to light up.
The first is to understand how the different ways you wire up an LED will effect it’s current consumption.
If you are unfamiliar with LEDs in general, I would recommend this excellent tutorial on Instructables here.

To understand how the strip is put together, I like to break it down to it’s individual parts.
R, G and B LED together = 1 LED package
Three of these LEDs together + 3 resistors = a section.
X # of sections wired together = a strip

LEDs in Series:
In these LEDs, each group of LEDs, the R, the G, and the B are all tied in series with each other.

In the case of these LEDs, each LED color family is tied together in series.
This is the Red LEDs are wired together.
Each LED is roughly 18mA and since you add current draw together when LEDs are wired in series, then you will get 18mA *3= 54mA for R.
The same goes for green. This is also roughly 18mA and 3 of them are in series so 18mA*3= 54mA for G.
Blue is slightly higher current, so it is roughly 20mA per LED and 3 of them in series together = 20mA *3 = 60mA

Example, if you have a LED that is using 15mA and you wire it in parallel with another LED that uses 15mA, then your total current draw is 15mA. However, LEDs in parallel should always have a matched series resistor in order to make each branch of the circuit even with each other. Theoretically if you have two LEDs that have identical current draw then you should be able to wire them up with each other without a resistor. However, even inside of the same manufacturer there are slight variations and it really is best to always have a matched series resistor if you are putting LEDs in parallel.

Which is why in the case of these LEDs–

All three colors, R, G, and B are wired together in parallel.
There is a series resistor in order to make each color match current draw.

Sine Blue is the highest current draw to approximately 60mA, then Red and Green have resistors that make 60mA feasible for their branches.

For a single section of the LED strip we are looking at approximately 60mA of current.

The strip is sections wired in series with each other.

Since LEDs in series we add the current together… then all you need to know is how many sections you have.

So, a power supply that has up to 6A will cover the worse case scenario.

Do I really need that?

Now a real question to ask… do I really need all 6A for my LED strip?

Probably not, mostly because it will be very rare that all LEDs will be on at full brightness at the same time.

READ  Starting a Project in MPLAB X for ChipKIT Products

However, I did look for the highest current, 12V power supply I could find, and found this one, a 12V, 3A supply, which is what I ended up using. 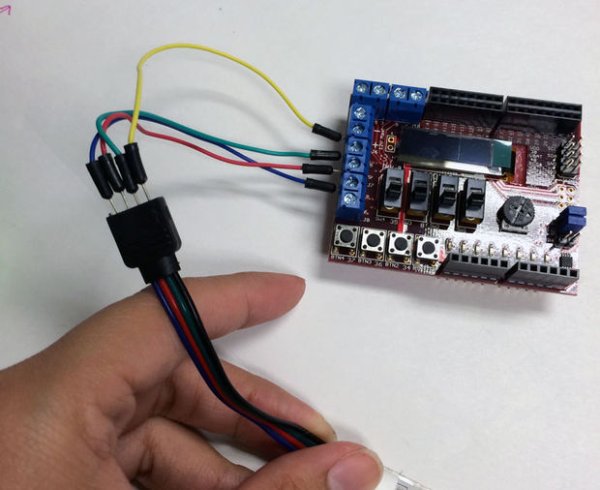 In the blog post mentioned, I talk about the main reason why I like the chipKIT Basic I/O Shield is for the open drain FET outputs.

These with a separate section that allows an external power supply is what makes the chipKIT Basic I/O Shield perfect for these LEDs (although you can achieve something similar using the Pmod OD1 (Peripheral Module Open Drain) instead of the entire I/O Shield).

To get started, we will need to connect the LEDs the screw terminals of the I/O shield (5, 3, and 9 ) using a screwdriver and breadboard wires to connect the two.

Depending on your LED strip depends on how easy this portion can be.
You may need to connect to a breadboard first, or you may be able to take the LED wire and put it directly to the screw terminal. In my case I had a female adapter on the end of my strip that I could plug the ends of the breadboard wire into the corresponding sockets. 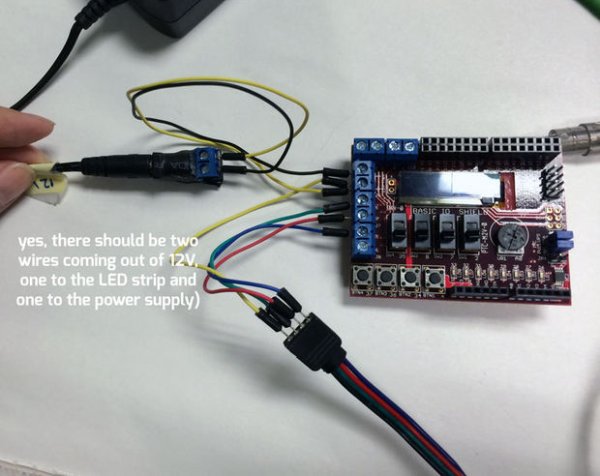 We need to add 12V + and GND to the I/O Shield in order to power the LEDs.

There are a few ways to do this, but in essence you need to have 2 wires that are tied to both power rails.
This can be achieved a few ways with a wall power supply.

The first is to cut off the barrel connector and to use the bare wire directly.
This is great if you have the option to use a wall supply in this manner (you have extra, don’t use it anymore etc).

I didn’t because I borrowed the connector from another person’s project at the Digilent MakerSpace and I need to return it in tact, so … I made an adapter (you can learn how I did it by looking at this instructable).

Step 6: Connect I/O Shield to Your ChipKIT Board 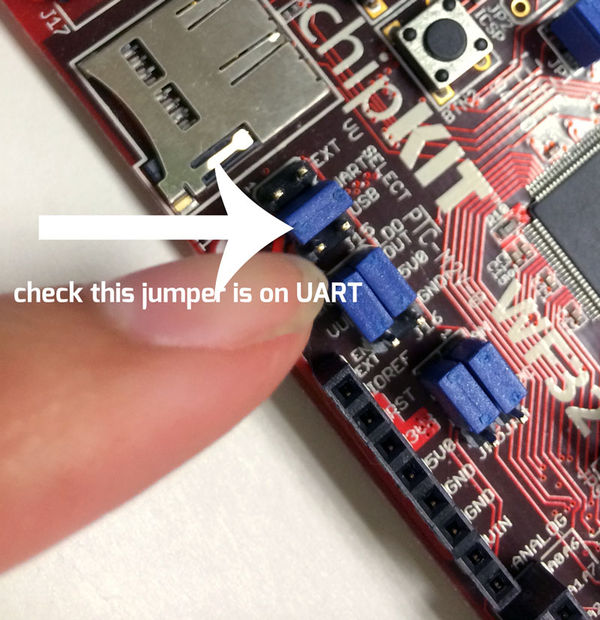 Now that you have the LEDs wired up completely, you can connect it to your chipKIT board.

I am using the WF32, but the steps should be the same for all of the other chipKIT compatible boards.

Ensure that your board is in UART mode (programmable mode).

(there may be 2 extra pins on the top row of both sides, this was the change in R3 Arduino Shield standard that some of the chipKIT boards incorporated).

Step 7: Program Your ChipKIT for the LED Demo Code 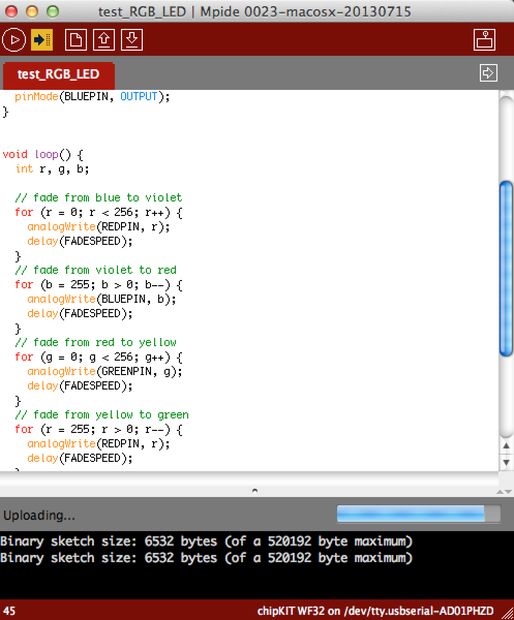 Connect your chipKIT via USB to your computer to program the demo code.

If you haven’t used MPIDE before, or are unfamiliar with the steps, please read this tutorial here first.

Copy and paste the following sketch and upload (alternatively you can use the one attached to this step):

Step 8: Power the LEDs and Watch!

With the chipKIT still plugged into USB, you can now add the Power to the LEDs.

Plug in the power supply. In my case, I had to add plugging in the barrel jack.

Right away you should see the LEDs fading different colors.

You can try out the other example on the blog post, combining switches with the RGB strip.

Step 9: Removing USB Cable and Powering Off Wall Jack Only 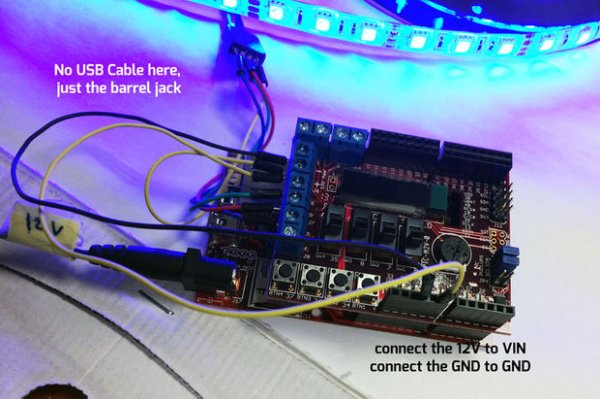 If you are using the WF32… this particular chipKIT has the ability to go up to 4A of current on it’s Vin output. Since the power supply only goes up to 3A, then there isn’t anything to worry about.

This is handy because you may want to remove the USB cable all together.

To do this, you will need to take the I/O Shield off and then move the jumper you had on UART to EXT (external).
This means you can no longer change the program on your chipKIT (if you want to reprogram it, you will need to move it back to UART).

Then wire up the 12V on the I/O shield over the VIN on the chipKIT and GND to GND (in my case this meant taking it out of the adapter and then moving it over to the pins on the WF32).

This should get you prepared to do other projects using the chipKIT WF32 + Analog RGB Strips!

The ADE7816 is a highly accurate, multichannel metering device that is capable of measuring one voltage channel and up to...