I developed this after my nephews got a Scalextric Sport slot car racing set for Christmas.  The set included a lap timer and counter but one thing that was missing was a way to start a race.  Having someone say “3-2-1-Go” wasn’t really doing the job, especially as it was easy to go just after “1” and before “Go”  This works in a similar way to the lights used in F1 motor racing with five lights illuminating sequentially, holding for a random time before all lights turn off to signal the race start. 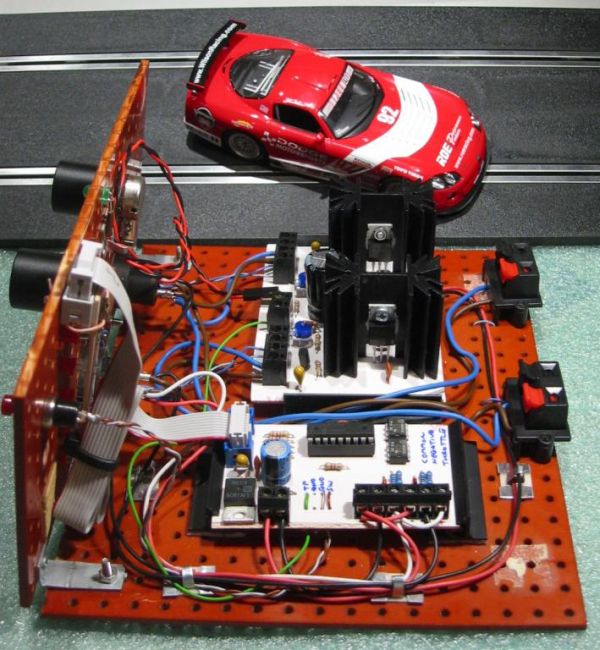 I put together a battery operated version one afternoon between Christmas and New Year, it took about four hours from concept to completed hardware in a box. [see original] It worked quite well but we still had the issue of ‘jump starting’ so I decided to develop things further.

I had four key requirements for the design.

I know that there’s a lot of computerised solutions that will do all kinds of smart things out there, including controlling the start of a race, but not everyone wants or needs that level of complexity.  The device described on this page is easy to use, cheap to build and doesn’t require any permanent modifications to the original Scalextric setup, although it can be hard wired in to permanent setup should you wish to do so.

Using the controller is very simple. To start a race simply press the start button.  The controller than waits for both hand throttles to be released before starting the countdown.  During the countdown the LEDs illuminate at 1 second intervals until all five LEDs are on.  The start of race is signaled when the LEDs extinguish after a random delay of between 0 and 3.5 seconds.

Graphical representation of the four modes are shown in the PDF document here.

If the Controller is used on its own without the PSU described here then modes 1 and 2 behave in the same way. Reference to the track power is also only relevant when used with this PSU.  The Controller still functions in all other respects as described.

To start a race countdown, press and release the start button.  LEDs 2 and 4 light if the controller has detected an open throttle. Countdown commences when both throttles are released.

Operating modes can be changed at anytime, except when a start is in progress. The mode is saved to non-volatile memory so the controller will start up in the mode that was selected when it was last used.

Full details of the Race Start Controller with schematics and PCB layouts are provided below. Click on the images for full size view.

What’s an Apple Watch good for? How about unlocking doors with just a tap on an app? We figured out...