PICJazz 20PIN Learning and Development Board 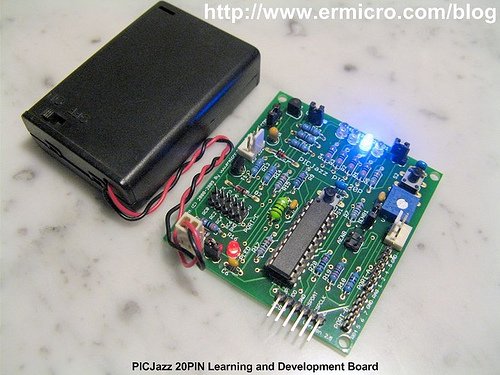 The PICJazz 20PIN board features:

The PICJazz 20PIN Board comes preprogrammed with a demonstration program (PICJazz16F690Demo.c). To use this program, connect the PICJazz 20PIN to the battery power that comes with the board. The demo program will display the chasing light on the four blue LED (mode 0). Rotate the user trimport, labeled VR, and the chasing LED speed will change in different rate. Press the user switch, labeled S2, and now the board will blink all the LED (mode 1). Press this user switch once again will bring you to the number guessing game through the RS232 port (mode 2).

For more detail: PICJazz 20PIN Learning and Development Board