Made a beautiful project with PIC16F84, both in video and joystick control provided by a single processor OrCAD program prepared by pcb schematic and pic assembly .asm, hex code

It has been designed hardware of the system’s CIP game to play with different kinds of games. It has two outlets for standard joystick C64/Amiga/Atari, video and audio. The processor is a PIC16F84 operating in 12MHz and that generates the video signal (PAL and NTSC) and audio software. The description of the hardware is the same for both games, Pong and Tetris.

In a PIC16F84 12Mhz, there are 3 million instructions per second, during exploration of line 64us, there are 192 instructions, and during the visible part of 52us only 156 instructions can be executed. If the value of the DA was set for each instruction during the 52us, get a resolution of 156 pixels on the x-axis, which is really bad. What is even worse is that the 156 pixels can not be used exactly as they wish, can hardly Estimating the value of a pixel in a clock cycle unless they are always the same so it can be generated by an instruction from a bit of system. 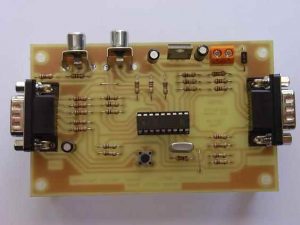 A standard TV is built with a vacuum tube having a phosphor screen on which a cannon bombarded with electrons. When the electrons hit the screen canyon, the phosphor emits light when electrons pull the barrel on it, and also has a short afterglow. The electron beam of the electron can be bent using magnets and pulling in different parts of the screen. If this is handled well, draw horizontal lines all over the screen in multiple passes, while the intensity of the line is controlled, a picture can be drawn on the screen. The screen is redrawn 25 times per second on a PAL system, but to reduce the oscillation picture is interlaced, first all the odd lines showing uniforms, so the image is partially updated 50 times per second. Thanks are due to the “persistence of vision effect” of the human brain that the image appears to be constant instead of flickering at 50Hz. To get each color on the screen is divided into three colors: red, green and blue, however here only discuss television in black and white, because that is only what is possible to generate real-time software using a PIC.