The photo shows a PIC16F84 microprocessor board tethered, by ribbon cable, to a circuit having 8 LEDs and an 8-position DIP switch. Learning a microprocessor’s capabilities often demands such a setup where LEDs turn on/off, blink at desired rates and respond to switches. This tutorial serves to quickly accelerate your PIC16F84 development ambitions. 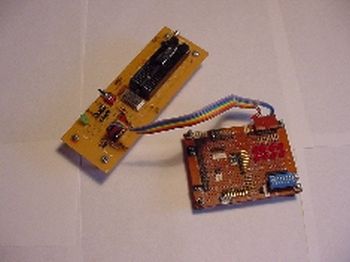 An embedded micro like the PIC16F84 is a 18-pin chip that can serve as the “brains” behind your project; the PIC can be outfitted with sensors and decide whether devices like motor and relays should be activated.

Like other micros, the PIC16F84 has a large and loyal following. There are many articles written on it both in print and on-line as well as several books. So why this tutorial? Much of the literature either provides too much or too little information. This tutorial is very focused because its purpose is to rapidly acquaint you with the fundamentals needed to develop PIC16F84-based applications. This is achieved with focused hands-on exercises exploring:

Port I/O, timers and serial communications are the building blocks to construct more complex systems. Supplementing these exercises are links to additional information which can leap frog your future development endeavors. This tutorial makes the following assumptions:

Additionally, it helps to have:

The tutorial breakdown is as follows:

Embedded micros having EPROM versus those with EEPROM require a fourth step – the program must be erased using ultraviolet light before starting again at Step 1. However the PIC16F84 uses EEPROM and is what makes it popular – the device programmer erases the program without ultraviolet light.

The PIC16F84 features two ports named A and B having five and eight digital lines respectively. Any line can be configured to be an input or output. Port I/O exercises is best accomplished by constructing a PIC16F84-based circuit which features a ZIF socket and 0.1 inch headers. The parts list, schematic and construction details follow.

US-based vendors include Jameco, Digikey, JDR and Radio Shack. Note: Boondog has no association with these vendors. Attempts were acquire all parts from a single vendor. Part numbers for common resistors are not given.

An effort was made to find a single source supplier of all parts. Jameco has every part cited in the table – Neighborhoold Radio Shacks typically have the proto boards in stock and are comparatively cheaper than similiar boards from Jameco.

Part connection methods and part locations are not critical. The left photo below shows a part layout that works well. The right photo shows a combination of wire wrapping and soldering can be used to construct the PIC16F84 LED/DIP circuit.

Tesla is not Nvidia’s only HPC processor

Graphics processor firm Nvidia sees a big opportunity for its GPUs in high performance computing (HPC), sometimes referred to as...