1. Introduction:
I made a water level sensor a little while a go to measure the water level in my underground rainwater harvesting tank. Thanks to the Jubilee I found time to finally setup the first part of my Arduino/Xbee wireless sensor network and the first sensor node was also meant to read from this water level sensor. I was somewhat surprised when it only returned 0s so I went and had a closer look. How the slug got into the enclosure is still a mystery to me… but looking at the bright side (after the uncontrolled swearing) I now had a reason to build a much better water level sensor 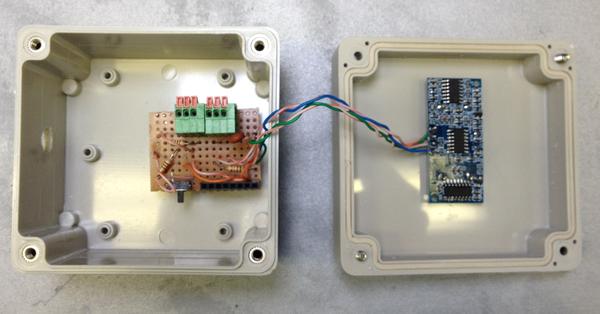 2. Add a few new bits…:
I’ve based the new sensor on the little perf-board from my sensor in Arduino project 6 but swapped the SRF05 for a HC-SR04 and mounted the result into a little square IP65 enclosure from Maplin.
Last shopping spree on ebay has resulted in me now being in possession of five HC-SR04 ultrasonic range finders which are very much a cheap “alternative to the SRF04. These work with the same code I used for the old sensor and have the same pins.