Light Fidelity (Li-Fi) is a bidirectional, high-speed and fully networked wireless communication technology similar to Wi-Fi. The term was coined by Harald Haas[1] and is a form of visible light communication and a subset of optical wireless communications (OWC) and could be a complement to RF communication (Wi-Fi or cellular networks), or even a replacement in contexts of data broadcasting. It is so far measured to be about 100 times faster than some Wi-Fi implementations, reaching speeds of 224 gigabits per second.[2] 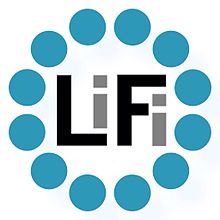 It is wireless and uses visible-light communication or infrared and near-ultraviolet instead of radio-frequency spectrum, part of optical wireless communications technology, which carries much more information, and has been proposed as a solution to the RF-bandwidth limitations.[3]

This OWC technology uses light from light-emitting diodes (LEDs) as a medium to deliver networked, mobile, high-speed communication in a similar manner to Wi-Fi.[4] The Li-Fi market is projected to have a compound annual growth rate of 82% from 2013 to 2018 and to be worth over $6 billion per year by 2018.[5]

Visible light communications (VLC) works by switching the current to the LEDs off and on at a very high rate,[6] too quick to be noticed by the human eye. Although Li-Fi LEDs would have to be kept on to transmit data, they could be dimmed to below human visibility while still emitting enough light to carry data.[7] The light waves cannot penetrate walls which makes a much shorter range, though more secure from hacking, relative to Wi-Fi.[8][9] Direct line of sight is not necessary for Li-Fi to transmit a signal; light reflected off the walls can achieve 70 Mbit/s.[10][11]

Li-Fi has the advantage of being useful in electromagnetic sensitive areas such as in aircraft cabins, hospitals and nuclear power plants without causing electromagnetic interference.[8][12][9] Both Wi-Fi and Li-Fi transmit data over the electromagnetic spectrum, but whereas Wi-Fi utilizes radio waves, Li-Fi uses visible light. While the US Federal Communications Commission has warned of a potential spectrum crisis because Wi-Fi is close to full capacity, Li-Fi has almost no limitations on capacity.[13] The visible light spectrum is 10,000 times larger than the entire radio frequency spectrum.[14] Researchers have reached data rates of over 10 Gbit/s, which is much faster than typical fast broadband in 2013.[15][16] Li-Fi is expected to be ten times cheaper than Wi-Fi.[7] Short range, low reliability and high installation costs are the potential downsides.[5][6]

The general term visible light communication (VLC), whose history dates back to the 1880s, includes any use of the visible light portion of the electromagnetic spectrum to transmit information. The D-Light project at Edinburgh’s Institute for Digital Communications was funded from January 2010 to January 2012.[22] Haas promoted this technology in his 2011 TED Global talk and helped start a company to market it.[23] PureLiFi, formerly pureVLC, is an original equipment manufacturer (OEM) firm set up to commercialize Li-Fi products for integration with existing LED-lighting systems.