The Sistine Chapel is now lit by LEDs, spectrally matched to excite the pigments used by Michelangelo, Botticelli and other artists working 500 hundred years ago.

Since the 1980s, the chapel has been lit from outside through its 12 windows by a mixture of 150W spotlights and 1kW halogen projectors – 66kW in total, according to Osram which supplied the LED replacement.

However, despite this huge power input, illuminance was “a few lux on the artworks, because semi-transparent plastic covers have been installed in front of the windows to protect the art from ultraviolet radiation”, said Osram. This put it in the range of ‘mesoscopic’ vision where colour perception is fading as the eye’s sensitive, but monochrome, rods take over vision. 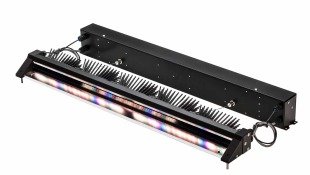 With LEDs on the inside of the chapel, power consumption is now 7.5kW, and the Renaissance paintings are five to 10 times better lit, with a minimum of 80 lux.

Two years of work have gone into developing lamps whose spectrum illuminates the pigments used, without damaging the art. Vatican conservators oversaw the project.

Professor Janos Schanda of the University of Pannonia in Hungary set the target: to light the paintings so they appear to be lit by sunlight – without necessarily using a sunlight spectrum. This concept has been dubbed ‘corresponding colour’.

The paints used, according to Osram, are lacquers made from dyes absorbed on an inorganic matrix base, and copper resinates – organic compounds dyed with copper.

Reflectance spectrums were non-destructively measured at 280 representative points by University of Pannonia experts, and specific wavelengths were found to stimulate specific pigments used in different areas within the chapel.

“Today, experts assume that Michelangelo did not mix his colours under candlelight or the light of torches but with daylight and thus with a cooler colour temperature,” said Osram.

The effect of the wavelength combinations over the next 100 years were estimated using accelerated life testing in a custom-built lab.

Luminaires for the chapel were based on a design installed in the Munich Lenbachhaus art museum in 2013 – with red, green, blue, warm white, and cool white LEDs. The five luminaire colour channels can be independently controlled for fine colour temperature adjustment between 3,000 and 6,000K depending on the artwork concerned.

In the Sistine Chapel, between 3,000 and 4,000K was deemed sufficient, and by varying the channel balance differently in different parts of the chapel an overall CRI of greater than 95 was achieved, said Osram: “a correction algorithm was developed that integrates the differing colour perception of the human eye with various colour temperatures into the spectral distribution of the LED light. It is probable that visitors are now able to experience the interplay of fresco colours just as Michelangelo once intended, and such fine-tuning is currently only possible with light-emitting diodes.”