I needed a good LC meter for my one of my next projects so I went and built the famous LC meter by Phil Rice. This LC meter design is pretty old but since it is a perfectly good device there was no need to design/build/debug one of my own. So, I just changed the original firmware a bit and added few electronic goodies to it to make it more compact. 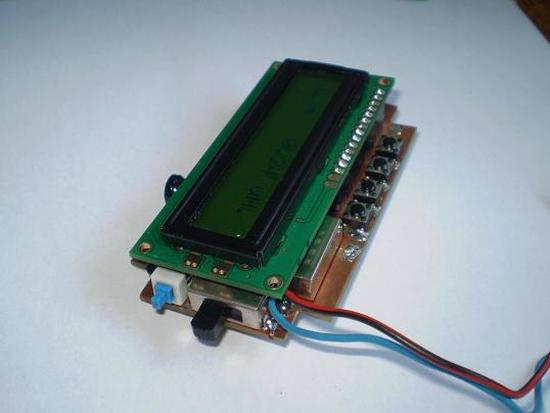 UPDATE: Project is on HackedGadgets, …and now also on Hack-a-Day!

It is a 135mAh one from a broken Bluetooth headset. After having no luck in finding the appropriate 2×16 or 1×16 LCD that works at 3.6V I decided to incorporate a 5V voltage booster that will do the trick. For this purpose I selected TPS61222 power booster from Texas Instruments. This little (extremely little) device is very good and it requires just a coil and two capacitors to operate.

Now, because there is a Li-Ion battery in the device I needed a way to charge it properly. This is done by MAX1811 Li-Ion charger IC from Maxim. Later on, by placing a small USB connector on board, all power supply & charging problems were solved.

Firmware modifications
No critical firmware modifications were made. All calculations are performed as they were in the original firmware. Only a few small changes were made such as: PORTB pinout re-arranged for LCD display, second line of display constantly shows oscillator frequency, LC meter is automatically re-calibrated (“zeroed”) when switching from L to C and the other way around.