Here is a PIC16F887 microcontroller and ESP8266 based temperature logging system. The project; ‘ESP8266 Temperature Logger using PIC16F887’ monitors temperature of the vicinity simultaneously and provides details of information collected. Well, the project also incorporates a modern concept; ThingSpeak which ensures safe storage and retrieval of data from things over the wide internet zone.

It is an IOT(Internet of things) application and API, it is an open source platform and is gaining more popularity for the reason. This platform ensures possibility to make use of data from different electronic devices, sensors etc., by storing it on the internet and then make required observations to reach a conclusion after proper analysis of those information.

So as to obtain the temperature details from the project ESP8266 Temperature Logger using PIC16F887, you can login into browser on your device and use ThingSpeak API through Wifi. 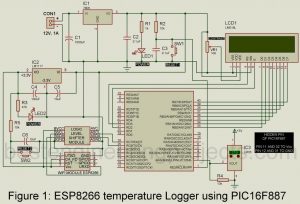 The entire circuit is powered using two power sources; 5V is required for PIC16F887, LCD and Logic-Level Shifter IC where ESP8266 module requires 3.3V. Since this ESP WiFi module intakes a regulated 3.3V altogether, you can replace IC2 with an adjustable voltage regulator, but be sure the voltage is precisely 3.3V.

The temperature sensor IC3 collects data and then forwards as input to IC4 through pin 2. The IC4 is responsible to transmit data to the Wifi module(ESP8266) via a logic level shifter. Finally, we can read the recorded temperature details on the screen of our gadgets; smartphone and laptops browsing through ThingSpeak website once the WiFi module executes data transmission process.

We establish the connection between the Wi-Fi modem of the user to ESP8266 Wi-Fi module and the temperature details are loaded onto the website of ThingSpeak, and it allows us to view the statics of temperature data on our devices through browser.

For visual interpretation of the project, LCD(pins D0-D7) is interfaced to IC4 (port B) which displays information about the circuit status and recorded data.

Earlier this month, Google released Android Things 1.0 and announced many consumer products that will ship in the coming months...