A user nicknamed “Ad” has taken some pictures of the inside of a new induction cooktop by Better China, see their original comments at this article.  This device is interesting because it appears to be a streamlined version of the Burton cooktop we looked at, with many fewer devices and one big, 20-pin mystery chip as the brains of the device.  With the posted pics and a little detective work we’ve found out a bit more about this device and will now share it with you, fine readers.

Check out the full story in the very beautiful pics Ad took.  Great work, and awesome camera by the way!

First, we will start out by showing the new pics Ad uploaded, then we’ll continue on with the rest of the article from yesterday.   First, the image from the box.

Next,  the device with the top removed.  Very nice, compact design.

We see the control board with 7-segment LED display for temp and power readout up in front.  The obligatory fan mounted down in the base of the unit, and a lovely induction coil.  Looks like about the same gauge Litz wire as the Burton unit but with a much nicer coil former.  We’re hoping it’s not all glued together in a big shellac clump like the Burton, so the coil can be disassembled and re-wound into a cylinder!  Aside from the melted black plastic formers, it APPEARS there’s nothing too troublesome holding the coil in place, which is a very encouraging sign. 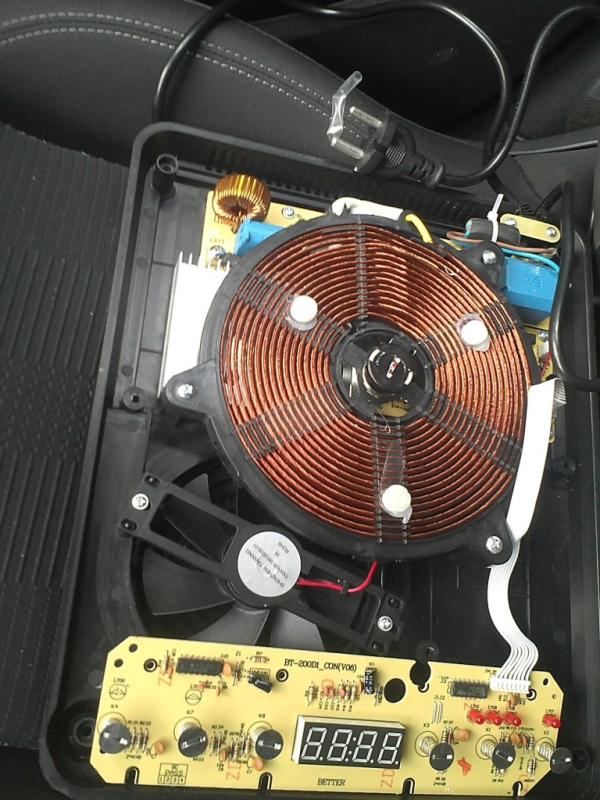 Next comes the power stage board.  Again, very clean and simplified design.  There’s the input filter/current feeding inductor up there in the upper left, the nice hefty blue caps for the resonant tank and feed tank, and MANY fewer components than the Burton.  Compact, and probably much cheaper to produce. 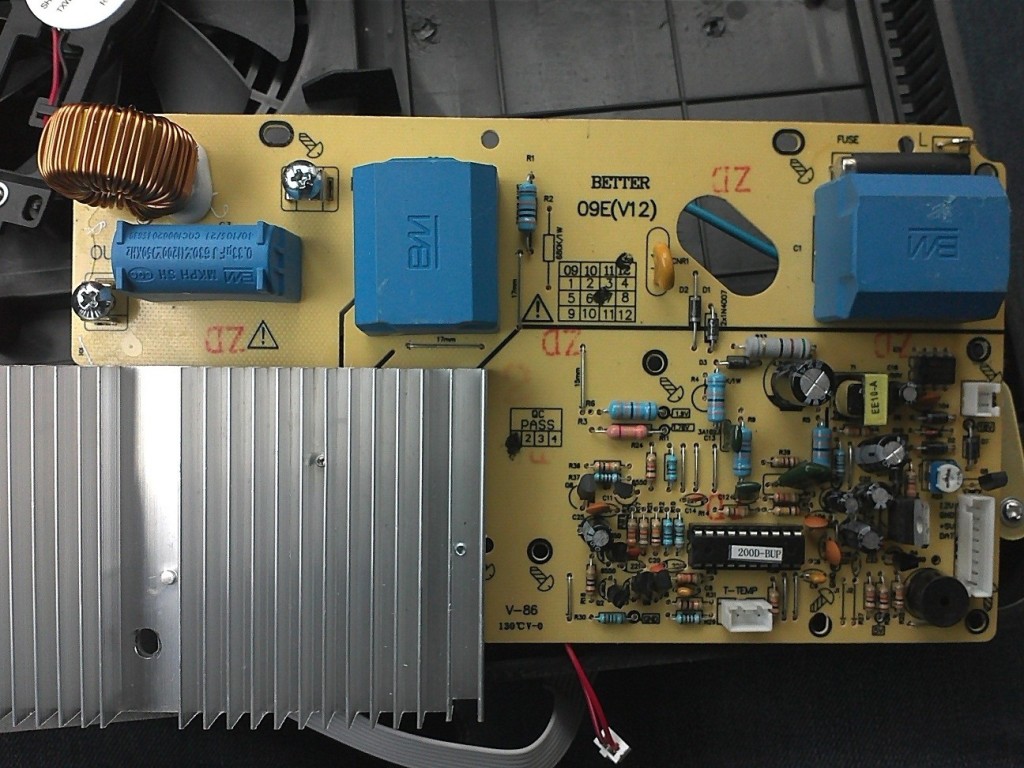 Ahh, the big boy himself.  The venerable 25N120 IGBT.  25A and 1200V of pure power switching fury.  A little slow for chopper based converters, but for this type of high current soft-switching application this device cannot be beat.  It’s interesting that this cooker gets away with only a single IGBT – not sure if it’s lower powered than the Burton, or whether only a single IGBT is needed to get enough power over there in 230V land.  Lucky bastards! 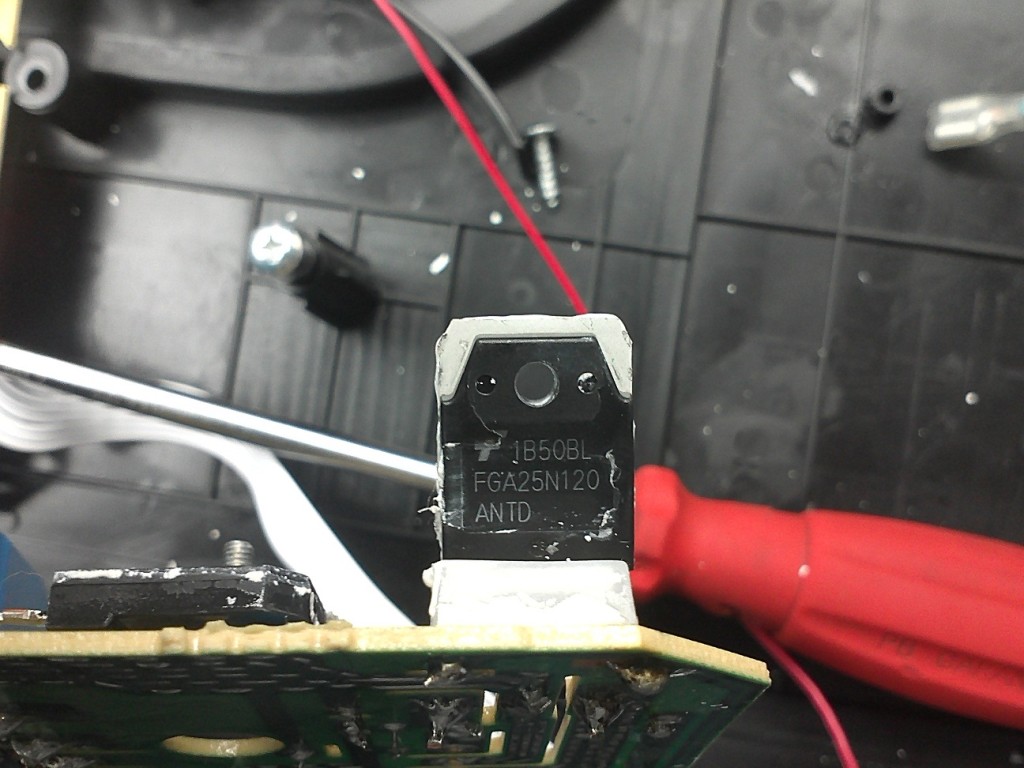 Here’s the solder side of the power board.

Again, cleaner and more compact.  And nicely diagrammed in white silkscreen to make circuit tracing easier!  Excellent!  Ad has been kind enough to label a few of the power stage components for us in red, along with their values. 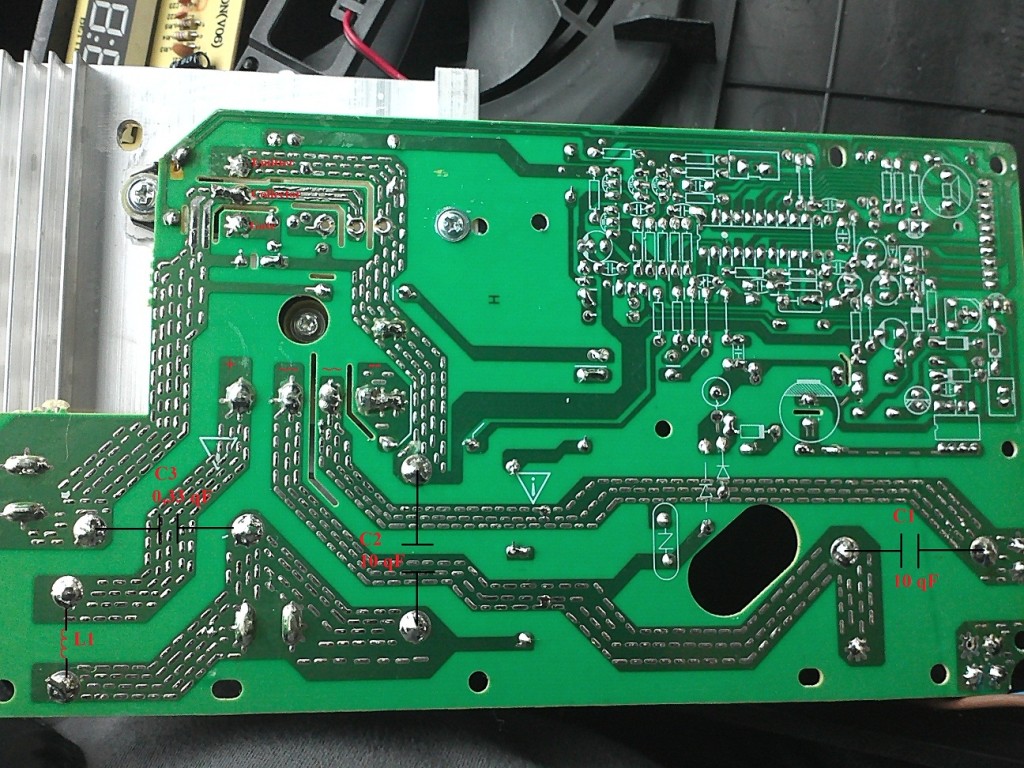 So that’s it for the extended tour of the insides of the new device.  We’ll continue on with the remainder of the original post from yesterday as we puzzle out the function of the power stage.  But rest assured, we are now opening eBay and looking for this little gem to see for ourselves what treasures it holds. 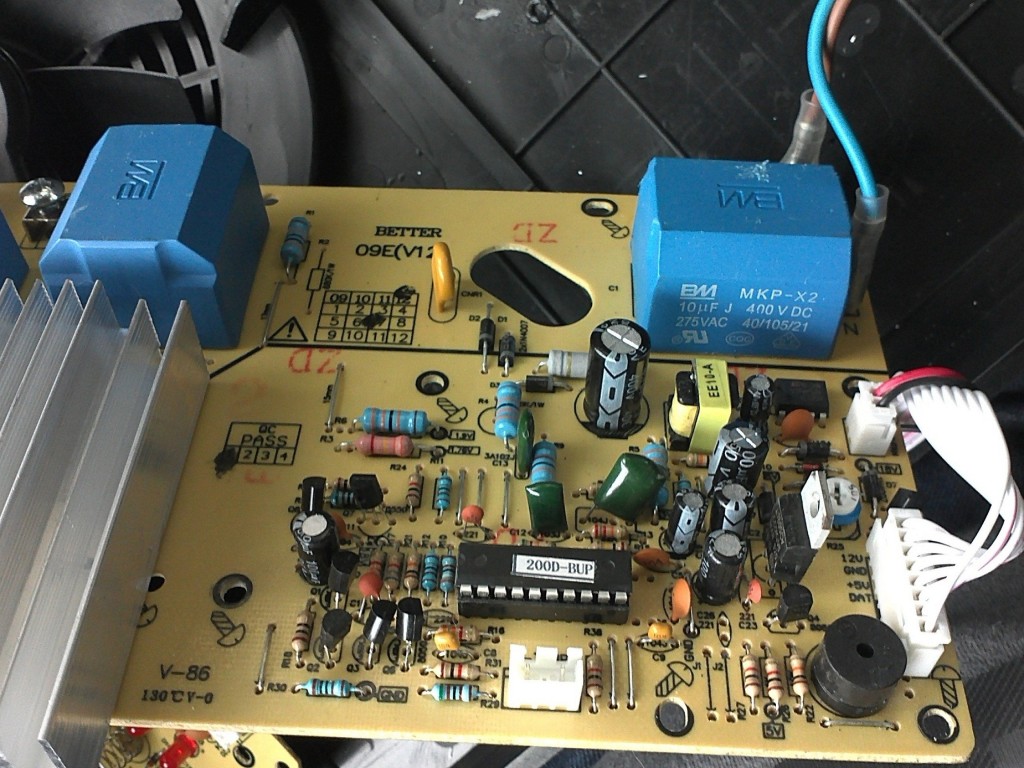 Let’s take a look and see what we can recognize.  We can see the heatsink, presumably cooling the bridge rectifier and IGBTs, as well as the big fat resonant caps (light blue).  The same old 8-pin flyback IC appears near the little yellow transformer, probably making the same old 18V (or 12V) main rail for running the gate driver of the IGBT.  And is that the good old 7805 linear regulator?  Must be the same old 5V rail for the control circuitry.  But no LM339?  And no ratsnest of discrete components to do the voltage sensing, current sensing, PWM, fault protection, etc?  Cool!

It appears to have all been replaced by a 20-pin mystery IC with the “200D-BUP” label.  This code is probably the model number (200W?  or 230V?) and revision code for the cooker.  Now…  What’s beneath this little lady’s skirt?  Ad obliges to give us a peek in this next pic. 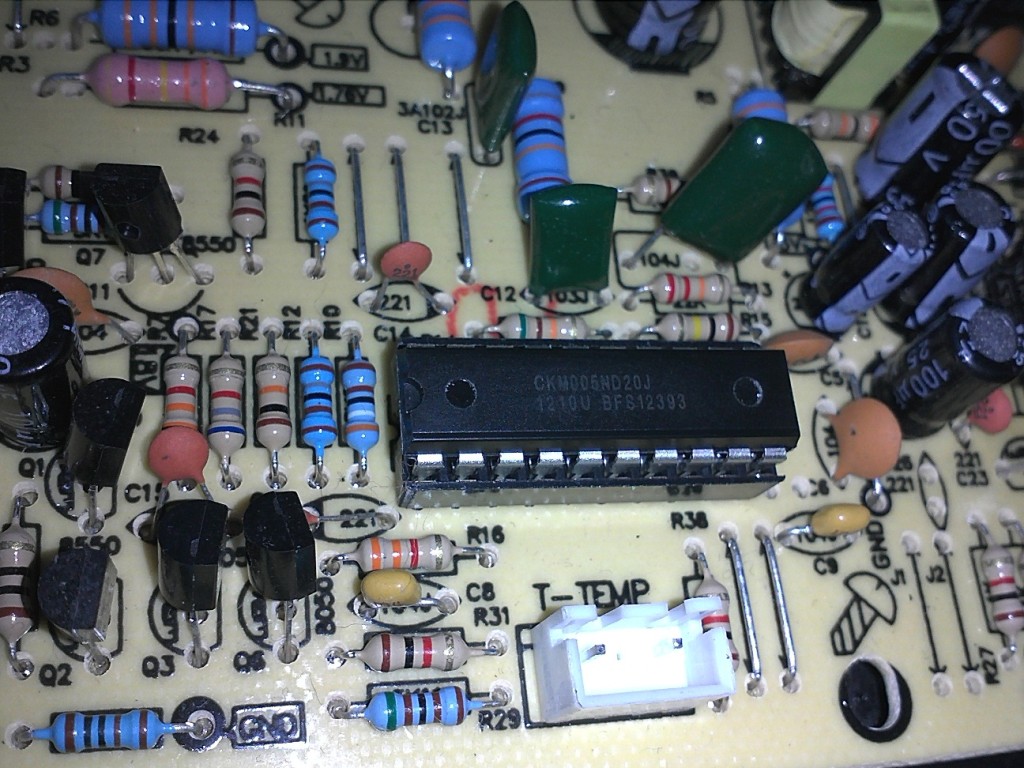 CKM005ND20J.  Huh?  20J is probably the package code, ND may be a product option.  So CKM005 is what we start googling.  Not much.  Guessing it’s a microcontroller gets a few sporadic hits on those junk pages listing every IC in the dictionary for sale.  So some confirmation, but not much info.  Some references to EMC corporation, and other chips such as CKM002 tell us that it probably IS a microcontroller and is specifically designed for the induction cooker application.  Their verbage is usually something about “MCU for IH Cooker”, so let’s dig even deeper.

Assuming that this device is produced in Asia for the Asia market, Google USA is probably the wrong search engine to use.  Firing up a Baidu search for CKM005 IH Cooker hits datasheet paydirt as the first hit!   Special thanks to “G E Chip Technology” for scanning and giving the interwebs a pdf copy of the datasheet!

Since you’d probably like to get yourself a look at this datasheet, we give you

The original link to the CKM005 Datasheet

Or if that goes down, you can always use

Great stuff!  So it’s a simple, 4-bit micro specifically designed for the induction heater application.  It actually looks like it’s specifically designed for Better China’s cooker topology, with the external components on the block diagram almost identical to what we saw in the circuit analysis of their discrete device version.  Let’s take a look 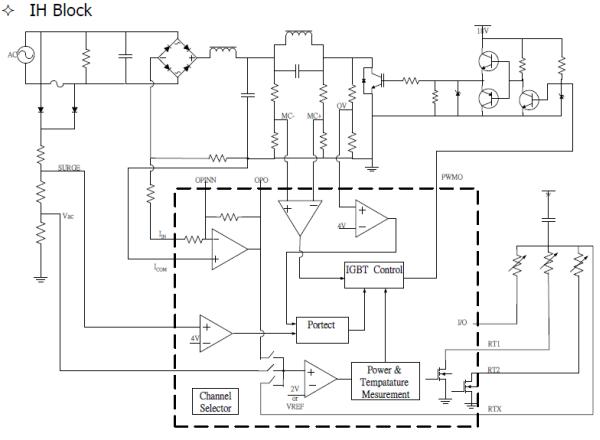 If you’re interested in this type of application, you really need to sit down and read through this entire datasheet.  They’ve made clever use of simple digital logic and a handful of comparators to come up with a robust and feature-rich device for IH cooker control.  There’s the MC+/- comparator (with adjustable internal delay) to detect the resonant ringdown of the switching node that is used to start a new cycle, a neato overvoltage detection on the switching node for startup and dead IGBT prevention, the IIN/ICOM op amp for tuning the switch current (via on-time) to be proportional with the rectified mains for nice power factor, and a host of various protection mechanisms.

All this good stuff is accessable to (and in some cases interrupting) the MCU for smooth interaction and flexible implementation.  Now is it better than an LM339?  It’s probably more reliable, and definitely more manufacturable than the ratsnest of discretes they had in the old version.  But you guys know how it goes these days – cost.  The LM339 is definitely cheaper, so from a manufacturing sense it all depends on the cost of the MCU versus the cost of all those discretes, and the cost of customer returns for blown IGBTs due to the somewhat less sophisticated control using discrete devices.

So – is it hackable?  We really don’t know yet.  If the system is well designed, it might be flexible enough to work with a different coil – the opportunity is certainly there with this IC.  But the CKM005 is OTP – one time programmable – so if they put in frequency limits or other checks that would be disturbed by us mucking around with it, maybe it’s not too hackable.  No idea if there’s any way to read the code back out, and if so – what the hell kind of opcodes this Tontek micro would use.  Not that this would be too hard to work out, of course..

But as far as hardware hacking goes:  We’d suggest first overriding the temperature and other protection inputs, and then hoping that their “pan detection” is not terribly sophisticated.  In our experiments, we’d want to be able to crank it up to max power even if we’re only heating a small object.  This is the kind of thing that a real cooker would not be exposed to, and might be protected against.

It will take a little more looking, and maybe getting one in the shop here to tinker with.  But the bottom line is that all this stuff could be easily implemented with a PIC micro – so maybe that’s the best avenue for future work:  An open-source microcontroller-based induction destruction unit.  Or something like that.