A team of University Wisconsin-Madison researchers, with support from the Defense Advanced Research Projects Agency’s (DARPA’s) Reliable Neural-Interface Technology (RE-NET) program, have developed “invisible” implantable medical sensor arrays that will not block views of brain activity. Their research was published in the Oct. 20 issue of Nature Communications. 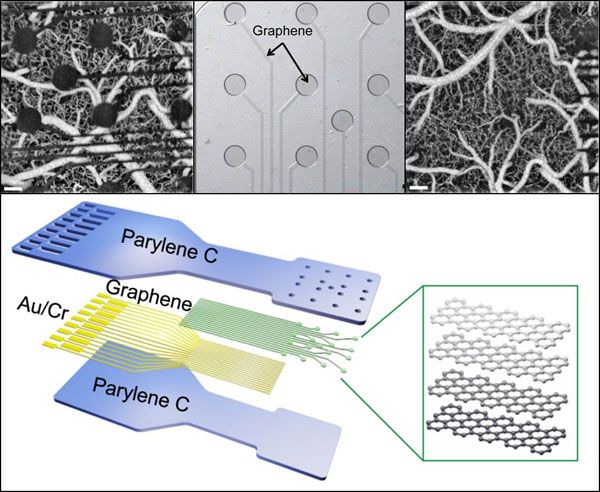 According to a recent Phys.org article, “electrical monitoring and stimulation of neuronal signaling is a mainstay technique for studying brain function, while emerging optical techniques—which use photons instead of electrons—are opening new opportunities for visualizing neural network structure and exploring brain functions. Electrical and optical techniques offer distinct and complementary advantages that, if used together, could offer profound benefits for studying the brain at high resolution. Combining these technologies is challenging, however, because conventional metal electrode technologies are too thick (>500 nm) to be transparent to light, making them incompatible with many optical approaches.”

“One of the holy grails of neural implant technology is that we’d really like to have an implant device that doesn’t interfere with any of the traditional imaging diagnostics,” says Justin Williams, professor of biomedical engineering and neurological surgery at UW-Madison. “A traditional implant looks like a square of dots, and you can’t see anything under it. We wanted to make a transparent electronic device.”

Conventional metal electrode technologies (top left) obstruct views of neural tissue. DARPA’s RE-NET program has funded the development of new graphene sensors that are electrically conductive but only 4 atoms thick—hundreds of times thinner than current contacts (top middle). Their extreme thinness enables nearly all light to pass through across a range of wavelengths. Placed on a flexible plastic backing that conforms to the shape of tissue (bottom), the sensors are part of a proof-of-concept tool that demonstrates much smaller, transparent contacts that can measure and stimulate neural tissue using both electrical and optical methods concurrently (top right). Source: DARPA

READ  POWER UP YOUR PROJECT WITH THE AI CORE XM2280

Required Hardware In order to program and debug a PIC microcontroller, you will need a few pieces of hardware. ICD-U40...