Skip to content
The Global System for Mobile (GSM) communication is the Second Generation of mobile technology. Although the world is moving towards Third and Fourth generation but GSM has been the most successful and widespread technology in the communication sector. GSM technology paved a new way for mobile communication. 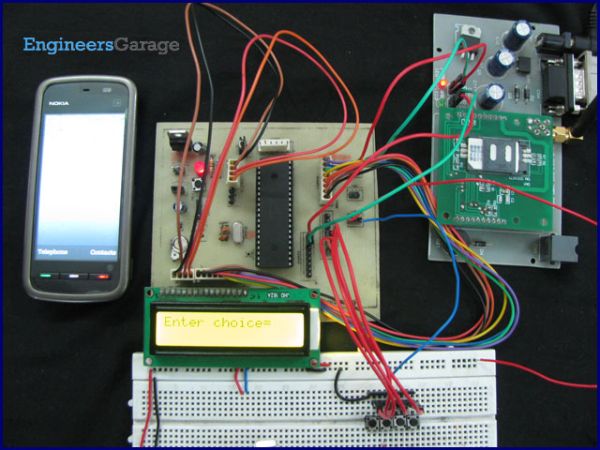 This project explains the interfacing of a GSM Module with a PIC microcontroller. It also covers a way to dial a particular GSM mobile number as well as send a message to it using AT Commands with the help of PIC18F4550.
As explained earlier (refer GSM interfacing with 8051), a line converter MAX232 is employed to convert the RS232 logic data of GSM Module to TTL logic so that it can be processed by the microcontroller. In this project, instead of RS232 logic data, TTL logic output has been taken and thus PIC18F4550 has been directly connected with GSM Modem without any line converter in between. The following diagram shows the TTL input and output of GSM modem used.
Objectives:
This project has following objectives which are fulfilled using AT Commands:
1.      Test the simple AT Command.
2.      Find out the IMEI number of the GSM Modem.
3.      Connect a call to a GSM mobile number (Dial a number).
4.      Send a text message to a mobile number.
The provision of these four operations has been provided by means of four tactile switches. Each switch corresponds to each of the above functions. AT Commands used to perform the above operations have been given below along with their output. (For complete list of AT Commands supported by GSM Modem, refer the list in tutorial on AT Commands.
For more detail: How to interface GSM Module with PIC18F4550 Microcontroller