For those who have a keen interest in gardening, a garden light would provide an option to admire the beauty of their plants even during the night time. These lights will normally be placed inside the garden, far from electrical outlets because it is not a good idea to run wires through your garden soil which will be wet and toiled most of the time. This is where Solar-powered garden lights come into the picture. These lights will have a battery that will be charged through a solar panel in the day time and during the night time the energy from the battery will be used to power the lights and the cycle repeats. In some of our previous articles we have built few solar energy-related projects like solar-powered cell phone charger and solar inverter circuit. 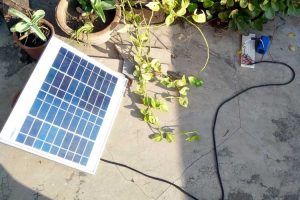 In this project, we are going to build a simple and cheap DIY solar garden light. The solar panel will charge a lithium battery during day time and when it becomes night time, the battery will turn on the lights until its day time again. Unlike other circuits, we will not be using a microcontroller or sensor, because the idea of the project is to reduce the component count to reduce the price and complexity of the circuit. That being said let’s start building our homemade solar light!!

Before choosing the value of components and getting into the circuit diagram, it is essential to choose the load for our project. By load, we refer to the type of Garden Light that we will be using in our project. Because the voltage and current rating of the light decides how the circuit can be designed.

The LEDs we are using in this project are normal Chinese LEDs with an operating voltage of 3.2V with a maximum of 4.5V forward voltage. Therefore, if two LEDs are connected in series, the forward voltage will be 6.4V. The LEDs used in our project are shown below. 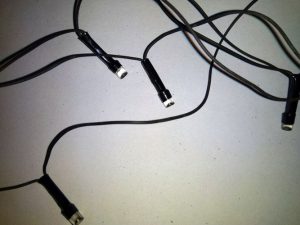 So a 7.4V lithium battery will be able to provide a minimum of 6.4V (fully discharged) to the maximum 8.4V (fully charged). Therefore, a 7.4V Lithium battery is used for a power source in this project, the same is shown below. If you are completely new to Lithium batteries, you can check out this Basics of Lithium-Ion Batteries article to understand better about batteries.

The battery which is selected for this application will have an inbuilt protection circuit that will protect the battery from overcharge, deep discharge, and short circuit related conditions. If your battery does not provide these features, make sure to use an external protection module, because lithium batteries can get highly unstable and might even explode if not handled properly.

The solar garden light circuit will consist of two parts. One is charging and the other one is to control the LEDs. The complete circuit diagram is explained as two parts, the first part is given below 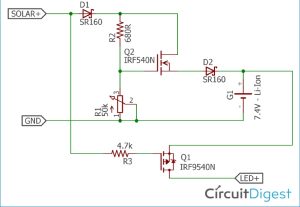 The other portion of the circuit is used to turn on the LED during dark conditions. This is done by the other P-Channel MOSFET Q1 which is IRF9540. The MOSFET gate is controlled by the solar voltage. Thus, whenever the solar cells produce voltage, the MOSFET remains turned off but in dark or at night, the cells do not produce voltage and the MOSFET gets turned ON. By using P Channel MOSFET, additional LDR and comparator circuit is completely eliminated.

Now, for the second part of the circuit, the LEDs are connected in a series-parallel condition. Two LED in series increases the forward voltage into double than a single LED, but the current flowing through LEDs gets divided. 4 parallel connections are made with two LEDs in series. More LEDs in parallel increase the current and affects the battery backup.

It is estimated that the current flow through each series is almost 40mA. Therefore, 4 parallel strings consume 160mA of current. The battery selected for this project will effectively light up the LEDs for almost 5-6 hours at a nominal charge condition. One can increase the LED strings as per needs.

To construct the circuit following components are required –

The below image shows the pinout of IRF540N N-channel and IRF9540 P-Channel Mosfet, that we will be using the project.