Graphene could be good for Quantum Computing


Graphene has become an all-purpose wonder material, spurring armies of researchers to explore new possibilities for this two-dimensional lattice of pure carbon. But new research at MIT has found additional potential for the material by uncovering unexpected features that show up under some extreme conditions — features that could render graphene suitable for exotic uses such as quantum computing. 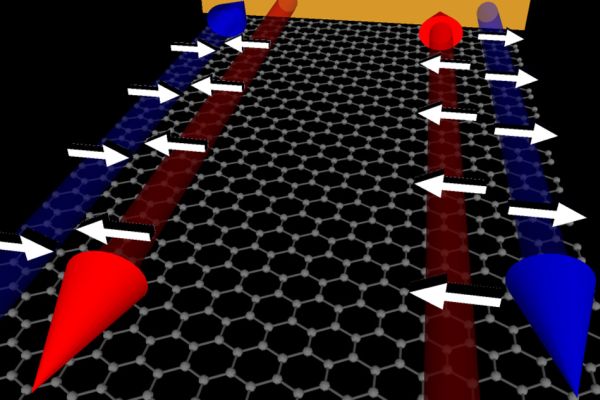 The research is published this week in the journal Nature, in a paper by professors Pablo Jarillo-Herrero and Ray Ashoori, postdocs Andrea Young and Ben Hunt, graduate student Javier Sanchez-Yamaguchi, and three others. Under an extremely powerful magnetic field and at extremely low temperature, the researchers found, graphene can effectively filter electrons according to the direction of their spin, something that cannot be done by any conventional electronic system.

Under typical conditions, sheets of graphene behave as normal conductors: Apply a voltage, and current flows throughout the two-dimensional flake. If you turn on a magnetic field perpendicular to the graphene flake, however, the behavior changes: Current flows only along the edge, while the bulk remains insulating. Moreover, this current flows only in one direction — clockwise or counterclockwise, depending on the orientation of the magnetic field — in a phenomenon known as the quantum Hall effect.

In the new work, the researchers found that if they applied a second powerful magnetic field — this time in the same plane as the graphene flake — the material’s behavior changes yet again: Electrons can move around the conducting edge in either direction, with electrons that have one kind of spin moving clockwise while those with the opposite spin move counterclockwise.

“We created an unusual kind of conductor along the edge,” says Young, a Pappalardo Postdoctoral Fellow in MIT’s physics department and the paper’s lead author, “virtually a one-dimensional wire.” The segregation of electrons according to spin is “a normal feature of topological insulators,” he says, “but graphene is not normally a topological insulator. We’re getting the same effect in a very different material system.”

What’s more, by varying the magnetic field, “we can turn these edge states on and off,” Young says. That switching capability means that, in principle, “we can make circuits and transistors out of these,” he says, which has not been realized before in conventional topological insulators.

There is another benefit of this spin selectivity, Young says: It prevents a phenomenon called “backscattering,” which could disrupt the motion of the electrons. As a result, imperfections that would ordinarily ruin the electronic properties of the material have little effect. “Even if the edges are ‘dirty,’ electrons are transmitted along this edge nearly perfectly,” he says

For more detail: Graphene could be good for Quantum Computing

It's amazing what you can do with just a few components: a load cell, a high gain analog-to-digtal converter and...