This project describes hardware and software I have developed which allows a small 8 bit PIC microprocessor to function as a single frequency detector or tone decoder.

Such a circuit can be used to detect the presence of a certain frequency within an analog signal, such as an audio signal.  I could be used in remote control applications, or to detect musical notes, or for any other situat 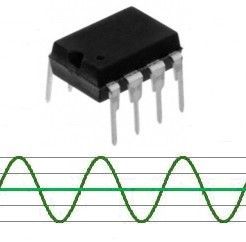 ion where a specific frequency must be detected in a signal that may contain other frequencies or noise.

The circuit is based an 8 pin PIC 12F683 microprocessor. Only a few additional resistors and capacitors are needed to complete a circuit that will accept an analog signal and drive a microprocessor output pin high when the selected frequency is present in the signal.  The circuit can be used as a frequecy detector IC that is part of some larger circuit of the users design.

The steps that follow detail the operation of the circuit and the program that runs on the processor. A description of the digital signal processing algorithm used by the PIC is included, but it is not necessary to understand it to make use of this circuit.

The code for programming the processor is included as a *.hex file. The source code *.asm file is also provided, to allow a user that is familiar with the Microchip PIC assembly language to modify the program. These files can be found under the step titled “Source Code”.

The operation of the circuit and the function of each component is described in the section that covers the schematic.

This circuit can easily be built on a solder less breadboard. The components are widely available at low cost from a number of sources, such as DigiKey, Mouser, Jameco, etc. that you may already be familiar with if you work with electronics.

READ  Take a Break From Coding: How to Relax at Work

You will need a programmer for PIC microprocessors. I have seen instructions on this site for building your own programming device, but I cannot speak for any of them. The programmer I use is from a company called Micro Engineer Labs, Inc. at http://www.melabs.com.

It is also handy to have an audio generator of some sort, for testing and experimentation. This can be as simple as a connection to the line out of a PC, CD player, MP3 player, etc.

For example, to verify that the circuit works to detect a certain frequency, just play a file containing that frequency, with the audio output of the playback device connected to the input of the circuit.

A useful program for generating sound files can be downloaded for free at http://www.goldwave.com. This program allows you to create *.wav files containing specific tones, sweeps, etc. very easily.

The programmed PIC microprocessor (U1) is used in the circuit as shown in the schematic.
The connection labeled +5V must connect to a regulated 5V power supply, such as the output of LM7805 regulator circuit.

The A/D converter measures voltages between 0V and the supply voltage VDD, which is usually 5 volts. The analog input may be a signal that swings above and below 0 volts, so its waveform will have positive and negative portions. In order to sample the input waveform with the A/D converter, the input signal needs to be shifted. The voltage divider created by resistors R1 and R2 sets the bias at half of the 0 to VDD A/D input range. The capacitor C1 couples the AC input signal to the A/D input, so now the input waveform swings about ½ VDD instead of swinging about 0 volts, as shown in the graphs below. 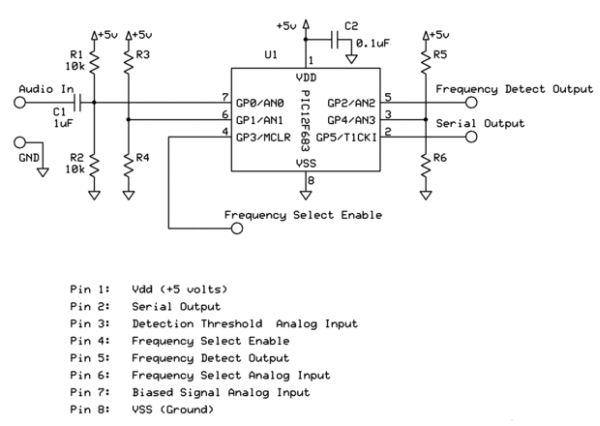 Electrolytic capacitors tend to leak with time. The circuit in Figure 1 lets you test capacitors and decide whether they’re...