One of the bad things about electricity is that it is mostly invisible: unless the voltages or currents are very high, it mostly flows invisibly through wires, it’s existence only implied by a lighted up LED, a beeping speaker, an LCD that indicates something or another secondary effect. Normally, this is what we want: the invisibility of electricity makes it very easy to integrate it into any project without having to think about secondary effects.

When troubleshooting, however, this can be a pain in the ass. That is the reason why one of the first things a hobbyist buys is a multimeter, which essentially is nothing more than a device that quantifies these invisible electricity streams by letting them flow through it. Most beginners can get away with a cheapie multimeter costing only a few bucks: as long as you only use them on your low-voltage powered project and don’t mind them being off by a bit, these can be quite sufficient. They may be prone to breaking, but getting a new one is cheap and easy.

At a certain point, however, you get sick of the stack of cheap meters with their dead batteries, worn out rotary buttons, lack of autoranging and faded displays. There’s also the safety aspect: maybe you’re working with mains now, and who knows where the fiery-hot remains of that shoddy shunt end up if you happen to have your meter still in the 10A mode when sticking the measuring leads on the mains to measure the voltage? 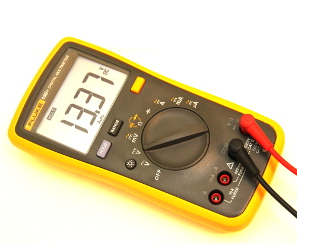 For me, that point came about a fair few years ago. I still worked with mostly digital things, so I didn’t need that much functionality, but I was on the market for a sturdy, safe multimeter. Around that point, Fluke started making multimeters for the Chinese and Indian markets: they were pretty cheap but well-rounded and had all the safety you’d expect of a Fluke. Also, because of gray import by eBay and sites aimed at selling Chinese products to the world, they were well-obtainable. I opted to invest around $45 in a Fluke 17B, and I have been very happy with it ever since. It is reliable, has quick continuity testing, good safety and overall all the features I needed. If I wanted, I could even open it up and hack a serial port to it to do data-logging.

When I moved to Shanghai, I decided to leave my 17B in the Netherlands: it came from China, it probably would be easy to pick a new one up there, right? After I arrived in China, I found out Fluke had upgraded their range: they now offered 15B+ and 17B+ meters. According to the specs, they were nice upgrades: a bigger, backlit LCD and increased capacitance measuring. I bought an 15B+ as my new meter.

After using it for a few months, I decided to get my old non-plus back from the Netherlands. The 15B+ was okay, but had a few drawbacks that started to irritate me: the continuity test was too slow to latch on for my taste (the one on the 17B is nigh instantaneous) and the auto-powerdown beeps a few times before doing its work, making me wonder which device made that beeping sound. After it has powered down, the 17B will wake up by pressing a button; with the 15B+ you actually have to switch the meter off and back to the range you want again. All in all, I much prefer my 17B to the 15B+.

DigiPot is a digital potentiometer using a rotary encoder as input along with a 7 segment display that show the...