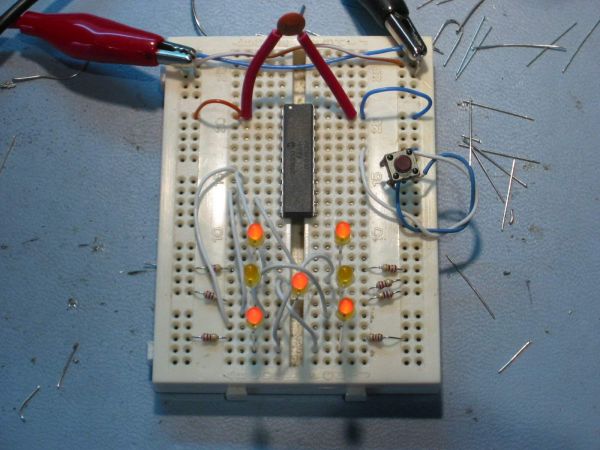 Built using a PIC16F84, about 4 hours worth of code and a few bits on a breadboard. This was the first time I’ve worked with PIC’s so it was a learning exercise. I started with the ‘Hello World’ microcontroller equivalent i.e.  Blinking LED, then tried the ‘Knight Rider’ sequencing LEDs, and then hacked this together. The code is written and assembled using the Microchip MPLAP IDE V5.70.  I only did this as an exercise to familiarise myself with PIC assembler, but having got it working I decided I wanted it smaller and as I had just acquired some 12F675s I took the original 16F84 code and developed it further to work with the 12F675.

For those of you who don’t know, and to save you the trouble of sending me an email to point out your  ignorance, dice is the plural of die see here.

LED die using PIC16F84 Die on bread board, and Programmer (the neat PCB to left) with Die breadboard foreground and my circa 1985 Computer PSU, modified to get supply for PIC programmer. The assembler code was written to work, not as an example I’m afraid, so no apologies for the quality.  I  haven’t done any further work with this since I decided the 8pin PIC12F675 was better suited for building a miniature die.  You should also note that if you do build a die using the 16F84 code below it is flawed in that it throws with unequal probability.

LED die using PIC12F675. Starting with the 16F84 code above I’ve modified and developed it further to run on an 8 pin 12F675 device.  This device has an internal 4Mhz oscillator so it needs no external support components and results in this minimum part die. I got this PIC for £0.99p so I reckon you can build the whole thing for about £2.50.  You don’t need a power switch since the PIC ‘sleeps’ between throws and uses just a few micro Amps in this state.

The artwork above is the second revision of the PCB.  The photo’s below show the die built on the first PCB version I did. This is pretty much identical to the second, I just manually tweaked some of the auto routed tracks and removed the connector for an external power connector.
Top image. Bottom image

Here’s an Ultra Small Die that I’ve built using a 12F675.  This would be ideal for a surface mount design but I haven’t gone that far with it.  This is built on an tiny bit of strip board, with some careful assembly and creative use of a baked bean can I’ve got down to the size of a 50 pence piece.

Servo motors are widely used in robotics and industries for motion control. They can be controlled by PWM signals where...