La Fontaine Du Campus Est (The Fountain of East Campus) is a computer-controlled, servo-actuated, LED and halogen-lit, sump-pump powered water fountain. It features five streams of water that can each be individually controlled (on/off) as well as pivoted (90 degrees of freedom). Each stream of water is lit by a halogen light. The perimeter of the fountain has RGB triplets that can perform various animations. The fountain and water are also illuminated by eight Luxeon LEDs. The entire system is controlled by a PC that sequences through a choreographed file called a ShowFile. Three circuit boards act as an interface between the fountain and the computer: a valve control board, an LED control board, and a servo control board. All but the last were custom built for La Fontaine Du Campus Est. 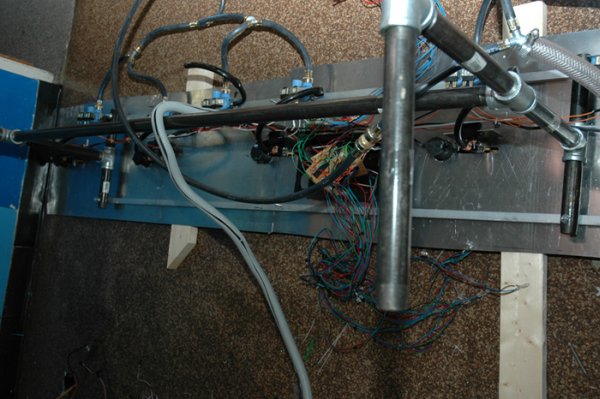 The above diagram shows the connections between the three circuit boards that run the fountain devices, the Fountain Director PC, and the fountain hardware itself.

The underside of the fountain. Blue objects with attached hoses are the washing machine solenoids used to switch each nozzle on and off.

Fountain-side electronics are mounted in a sealed box under the fountain surface.

The valves to turn the nozzles on or off are activated by relays. The halogen lamps that point up the water streams are also activated by relays. The valve/halogen controller board is a custom circuit that interfaces via USB and activates these inductive loads on demand. There is also built-in logic that ensures a relief valve is always in the proper state of operation. The circuit is based around a PIC 18-series microcontroller and an FTDI USB-UART converter.

The LED controller is designed to serve as a general purpose lighting controller. It controls the 24 fountain-mounted LEDs as well as the eight Luxeons. All lighting animations are built into the onboard memory. A computer interfaces with the board and tells it which animation to play, and with what color(s).

The board can drive 24 high intensity LEDs (up to 50 mA each) and 24 high-current Luxeon LEDs (up to 3 watts each). The 48 outputs are controlled via a USB interface or PS/2 interpreter (designed to connect to a gyration mouse). Several accessory buttons and LED indicators are included on the board for debugging and extra features. In addition, the system can be expanded and even daisy-chained by using the UART breakout header. The device is based around a PIC 18F2455 microcontroller.

The nozzles connect to washing machine solenoid valves. These turn the water stream on or off. These valves, in turn, are coupled together and all feed into a single sump-pump output. In addition to the nozzle control valves, one extra valve acts as a relief valve. It opens whenever all nozzles are off and the pump is on. 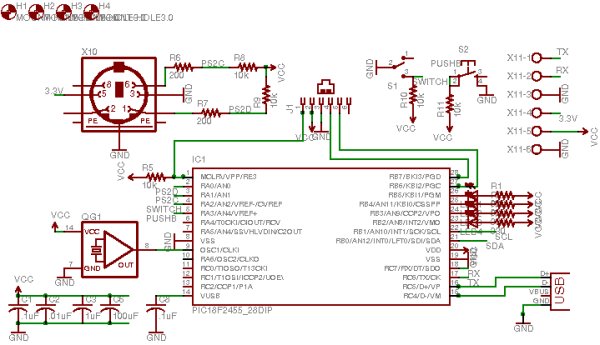 The nozzles pivot when the servo they are attached to moves. The servos are all independently controlled by the Fountain Director.