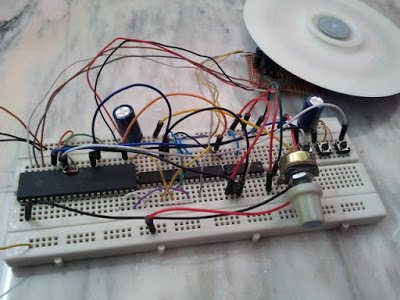 CD-ROM Spindle motor (BLDC) control with PIC18F4550 microcontroller
This topic shows how to make the same controller using L293D motor driver instead of the 3-phase bridge circuit.
The 3 phase bridge is more complicated and expansive and while the L293D motor driver chip is a small, cheap and saves time.
In this project we need two L293D chips because the BLDC motor is a three phase motor, and at any time two windings energized while the third one floating.
The L293D has 4 inputs and 4 outputs with 2 enable pins, each enable pin controls 2 outputs as shown below:

Complete circuit schematic is shown below: 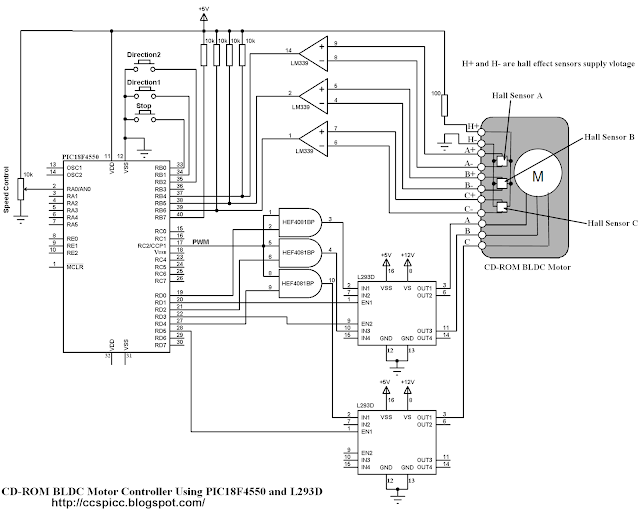 In the circuit there are 3 buttons connected to RB0, RB1 and RB2. The buttons connected to RB1 and RB2 are used to start the BLDC motor and the other button is a stop button.
The BLDC motor speed is controlled using a potentiometer connected to AN0 channel.
There are 3 AND gates (HEF4081BP) in the circuit, these gates are used to get a 3 PWM signals from the original one which comes from RC2 pin using CCP1 module.
HEF4081BP has 4 independent 2-input AND gates, three of them are used. This IC needs a supply voltage of +5V between pins 7 (GND) and 14 (VCC).
PIC18F4550 microcontroller internal oscillator is used (8MHz).
BLDC Motor control using PIC18F4550 and L293D CCS PIC C code:

Researchers at the University of Washington developed a new backscatter sensors that can operate over long ranges with very little power. The researchers demonstrated...