Application of Microcontroller in Science and Technology


The rapid growth in science and technology offers several advantages of using integrated circuits, microprocessors, microcontrollers, embedded chips, etc., in designing electrical and electronics projects and circuits by reducing their size, cost, and complexity.  Using these embedded chips and microcontrollers is increasing due to its simplicity and benefits. The microcontrollers can be programmed to perform various tasks based on requirement of the circuit operation. Thus, simply by changing program instructions various tasks can be performed by a single circuit without changing any hardware circuitry of the project. Thus, the application of microcontroller in science and technology is increasing rapidly.

Application of Microcontroller 8051 in Robotics

This robotic project is designed to detect and avoid the obstacles on the robotic vehicle’s path. For this purpose, an ultrasonic sensor pair is used in this project, which is interfaced to microcontroller. If any obstacle is sensed by the ultrasonic sensor, then a signal is given to the microcontroller which in turn generates an appropriate output signal. This output signal is fed to motor driver IC which is interfaced to the motors of the robotic vehicle. 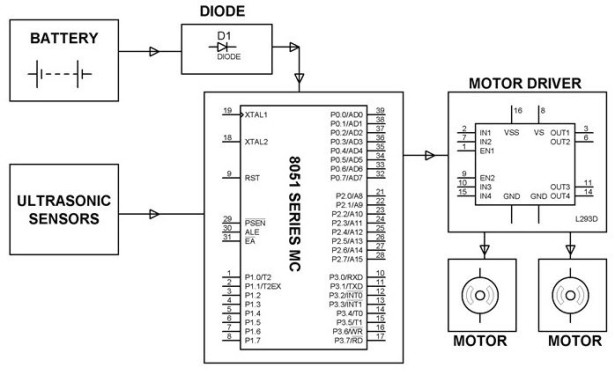 
Thus, based on the signals received from the motor driver IC the motors can change the direction (left, right, forward, and backward) of the robotic vehicle to avoid the obstacles (if any are detected by ultrasonic sensor). The speed of the motors can be controlled using pulse width modulation (PWM) technique.

For more detail: Application of Microcontroller in Science and Technology

This is a multi-chapter instructable. I will be describing the making of a short/medium range RF remote-control using the UHF...