A design for a simple microwattmeter. Input range -75 dBm to + 5 dBm. Frequency range 2 to 50 MHz. Level resolution is 0.1 dBm, frequency resolution is 10 kHz. Log-output about 0.5 – 3.5 Volt. Output for external counter. The meter uses a AD606 as log-converter, a MAX186 as ADC, a PIC16C84 as controller and a HD44780 type LCD. The PIC measures frequency and level of the input signal and calculates level in dBm using frequency-dependant factors. Details of the design are provided as well as a listing of the PIC assembler program.

In January 1997 I saw the datasheet of the Analog Devices AD606, a chip that will convert a -75 dBm to +5 dBm RF input level to a corresponding DC output between 0.5 and 3.5 Volts. The chip will work up to 50 MHz. It also has a limiter output for frequency measurement purposes. I tried the AD606 using a basic application circuit as recommended in the datasheet.

At the same time I saw designs appearing which used a Microchip PIC16C84 microcontroller. It seemed that this chip was well suited to the needs of the hobbiest: simple architecture, cheap, 1024 words of eeprom program memory and easy to program and reprogram using a programmer you can build yourself.

First, I subscribed to the PICLIST This list proved to be an invaluable tool to quickly learn about most aspects of PIC microcontrollers. I first built the programmer, using the design of David Tait . David has a schematic and software for a low-cost programmer to connect to a PC parallel port. I then used his example of a first circuit to build, a simple LED-flasher.

Next, I acquired some used LCD character displays using a Hitachi HD44780 controller. How to use these things ? Again, David Tait had a simple C program to test LCD displays connected to a PC parallel port. I also read the excellent LCD overview by by Peer Ouwehand .

I then downloaded the necessary assembler (MPASM) from Microchip and used Peer’s examples to test a PIC16C84 and a display. This worked well so I began thinking of constructing a serious application: a PIC controlled microwattmeter. This instrument would use the AD606, and the PIC would control an ADC to measure the AD606 output voltage and also count the AD606 limiter pulses to give an indication of the signal frequency.

First I concentrated on measuring frequency. Numerous examples to do this with a PIC are available, I used an example provided by Simone Benvenuti and Andrea Geniola , I don’t remember from which site I picked up the example. In this design frequency is measured by counting pulses on RA4 during one millisecond. 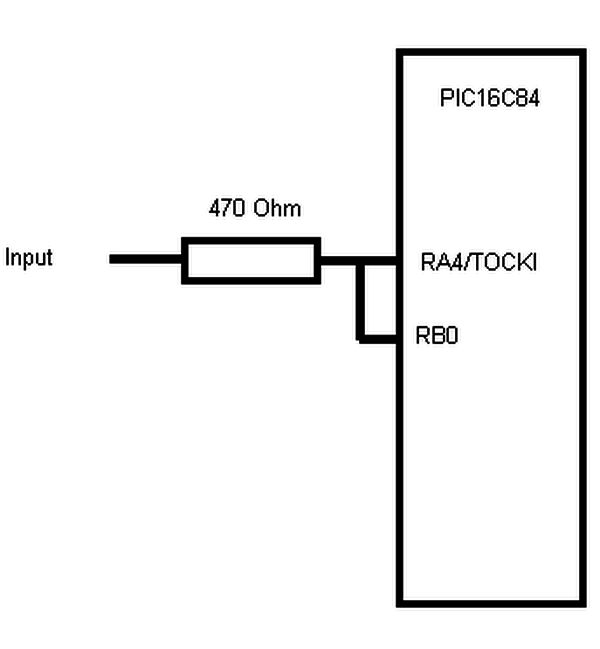 This time is determined by a delay loop. The counter is activated during this time by three-stating another pin (in this example RB0) connected to the counter pin. The counter is stopped by pulling this pin low. The measured frequency thus has a resolution of 1 kHz.

In February of 2007 I spent a little while prototyping a board that turns any bicycle wheel into a moving...