There are a lot of really cool iPod remote control projects: some have simple buttons, some react to  heartbeat or body motion, and others are designed to interface directly with software running on a computer.

However, not one of them is truly wearable, or speaks to the unique needs of e-textiles designers.  They have been mostly prototypes, and are seldom intended for serious, daily use.

With this in mind, we took our time to design a system that is tiny, robust, and very easy to incorporate into your project.  The end result has three components:

1. a tiny, complete circuit that sits *inside* the dock connector
2. four pieces of conductive fabric that form the two buttons of the remote
3. two-channel conductive yarn to connect the sections (we spin it ourselves)

These components empower beginning and professional e-textile enthusiasts to make a truly useful, wearable, interactive craft project that can be sewn into a favorite jacket or scarf. One could also build it into a car, into a floor mat, a shower curtain, or an interactive art project.

The point is, this is *not* yet another prototype. We actually use it everyday, and so would you. I have one hanging from my backpack, a friend has it on her handbag, and another has it clipped to her jackets. Soon, we’ll make one  gloves. Even our non-techie friends and family build and use them. That’s the point.

This instructable shows how you could make your own fabric-based remote control in 10 minutes using our pieces. There’s also a simple (but neat) section on how to read many resistor values using only two wires (instead of multiple wires).

It works with any iPod or iPhone with a dock connector.

*The cat pattern is from ‘the cute book’ by Aranzi Aronzo, whom we really love*
Magic dock connector, conductive fabrics, yarn & thread available at the Aniomagic store.
You can also get conductive fabric and 3M velostat from lessemf.com We use both kinds in this project: depending on which pair you press, the combined resistance can vary from a few hundred ohms to 100,000 ohms. The tiny circuit reads the difference in resistance and translates them to pulses sent to the iPod.

The light gray one (zelf) is very conductive. It’s used for the Forward/Volume UP actions.
The darker one (velostat) is not so conductive. It’s used for the Back/Volume DOWN actions.
You can get these from the Aniomagic store, or from lessemf. You can also substitute any material or actual resistors as long as one of them is less than 1kOhm, and the other is around 50kOhm.
You’re essentially building a circuit with two resistors in parallel, which manifest themselves when  you squeeze either pair of fabrics together.

We encourage you to use this technique in other projects when you want to differentiate between two  (or more) different presses, but keep the wire count at two. The caveat is you need to calculate all the resistance combinations and use an analog input pin on your controller.

Experiment with the right size holes in the felt:
– too small requires a hard squeeze
– too large means you might activate the remote just by holding it.

Use plain cotton thread to sew the three pieces together. 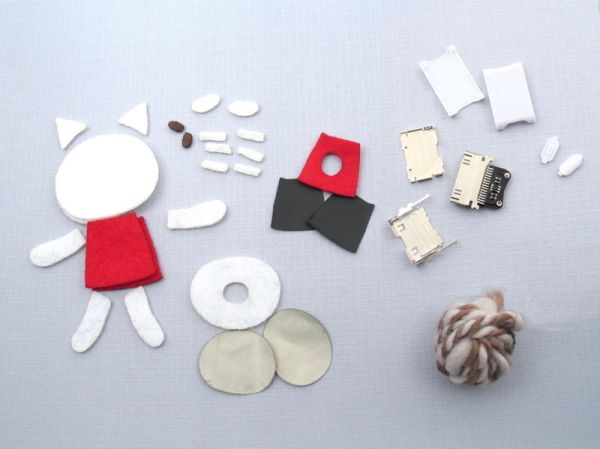 After making the two different switches, use a multimeter to measure the resistance you get when you squeeze each one. The zelf one should be a virtual short circuit, and the velostat one should be between 30kOhms and 100kOhms, depending on size of fabric, size of hole, and pressure applied.

Now you’re ready to attach your pieces with conductive thread. Arrange them so that you have enough spacing, and figure out how the conductive yarn will connect to your project.
Because of the nature of the circuit, the  yarn must be connected to the more conductive material. In this case, it’s at the top. If you do it the other way (connect it to the velostat), the total resistance will always be dominated by the velostat, because it’s much higher than the resistance of the zelf.

Flip over, and repeat the previous process with a fresh piece of conductive thread.

Aniomagic conductive yarn contains two channels of hand-spun combed merino wool. It’s a two ply spin with nominal resistance over distances up to 30 yards, and no conductance between the two strands. The yarn looks and feels no different than conventional yarn, and takes well to gentle  handwashing. We’re really proud of this, as we can now consider knitting entire scarves without worrying about short circuits.