In this project, we built a writing machine using a 4-DOF robot arm. This robot arm is controlled by PIC32 and can write the 26 letters and ten numbers. Users can send instructions to the microcontroller through the serial interface to control the robot arm to write words or digits they want. 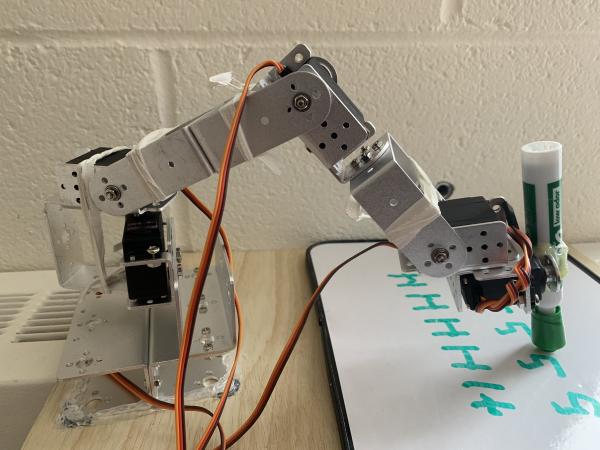 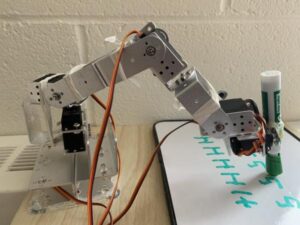 Since what we want is to control the arm write on a 2D surface, the goal is to transfer the xy axis into the PWM duty cycle of each servo. We used two steps to achieve this.

The first step is to find the relationship between the angle of each part of the robot arm and the ρ-𝛉 axis. 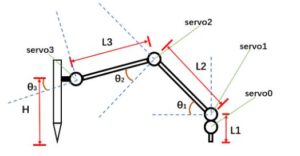 Since we need to keep the z axis of marker constant when writing, an equation of 𝛉1 and 𝛉2 can be listed.

Servo3 is used to keep the marker vertical at all times. So

From the image above, we can find that

Due to the limitation of budget and time, this robot arm has no feedback and other sensors. We have to slow down its writing speed to make it work more stable and precisely. These are achieved by software.

The robot arm has 6 DOFs at first. We removed one and fixed one to make it a 4-DOF arm. The movements are controlled by servos. Due to the budget, the whole system had no feedback and other sensors. The servo used is MG90S. Its supply voltage is 4.8V to 6V. For each servo, the peak current while working is about 500mA, so the output of the power supply we use should be more than 6V*0.5A*4=12W. We used a 50W(5V 10A) power supply.

Since the amplitude of the PWM to drive this kind of servo is 4.8 to 6V and the amplitude of PWM wave generated by PIC32 is only 3.3V, a converter is needed. We used 74lc32(OR gate) to fix this problem. The schematic shows below. 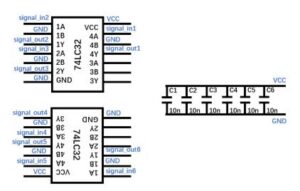 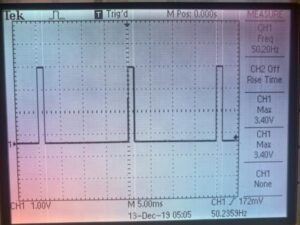 The robot arm has four degrees of freedom, so there are we four PWM waves to control the angle positions. Timer 3 is used to generate the wave period and OC1 – OC4 four output compare units which maps to RB7, RB8, RB2 and RB9. The generate period parameter is set to 50000, and frequency division parameter is set to 16. The PWM signal frequency is 50HZ.

The duty cycle determined the angle of servo. The relationship between duty cycle and the servo angle is shown in the table below

The PWM generation function is in the thread: protothread_timer which enters every 1ms. In this thread, the PWM duty cycles of four PWM waves are updated based on the structure of characters to change the posture of the arm.

As mentioned above, the position of the pen is determined by the angles of four servos and we have already built a map table from xy coordinate of the pen to the angles of the four servo. With the duty-cycle and angle transformation table above, we wrote a function called write_xy to draw a single point on position (x, y).

However, only have the ‘write point’ function is not convenient enough to write characters. So another function called drawline is developed based on the write point function. The input of the drawline function is the xy coordinate of the start point and the end point. And it finds ten points on this line and draw a straight line in an accumulated way. The drawline function has three steps to draw a line: lift the pen from the original position, move to the start point, drop down the pen and write a line form the start point to the end point. The lifting movement can avoid draw mistakenly when we write two separated lines.

Another thing of writing characters is when to drop the pen down on the paper to write a character and when to move the pen above the paper in between of writing two characters. Another function called setxy is applied on this situation. Setxy function has two parameters, the first one is the target coordinate, the other one is the state of the arm when it reaches that position. The state of the arm are dropping the pen down or uplifting the pen.

Since there is no feedback or other sensors to control the speed of the servos, in software, we reduce the PWM duty cycle smoothly to avoid moving arm so fast and braking the mechanical structure of the arm.

The basic idea of writing characters on the paper is that we store the line information of 10 digits (0 – 9) and 26 letters (A – Z) as a hash table, when we receive a character input command from serial we check the table then send the coordinate information to the drawline function.For example, the data structure of letter ‘A’ can be: [(1,2,1 + font_size * 2,2 – font_size), (1,2,1 + font_size + 2,2 + font_size), (2,1.5,2,1.5 + font_size)] which means the start points and the end points of 3 different lines and the font_size parameter determined the size of the character. The example below shows characters ‘A’ when font_size = 1.

The PWM is 50HZ with duty cycle from 20% to 40%. And the hardware increase the amplitude of the PWM output from PIC32 to 5V. The following image is the results of the amplified PWM. 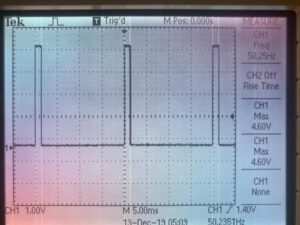 Because of the imprecision of the mechanical structure and approximation of the servo angles the accuracy of writing varies related to the distance from the robot arm. The figure below shows the range where the arm can reach and the accuracy distribution in the work range. 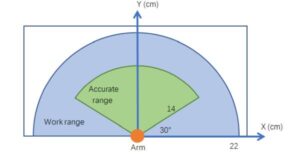 The figure below are character ‘5’ and ‘H’ written in the line mode to test the variance of accuracy of different x y coordinate.

The figure below are character ‘5’ in different font size and the test mode result.