Wireless Infrared UART prototype can be built by using two PIC16F876A controllers. One as IR receiver with dedicated Infrared decoder like SFH505A, SFH506 or similar IR receiver IC and other microcontroller as a transmitter via IR LEDs.

Assembly files with transmitter/reciever control code available at the bottom of the page.Tested range was about 2 meters, use LED reflector or high power IR LED to increase the effective distance.To verify circuit operation point the transmitter in the direction of receiver unit like a remote control, press any keypad key and you should see its binary code shown on LED bar graph connected to PORTC.Currently only one way communication is implemented, in order to make it bidirectional a second receiver with different carrier frequency is required. 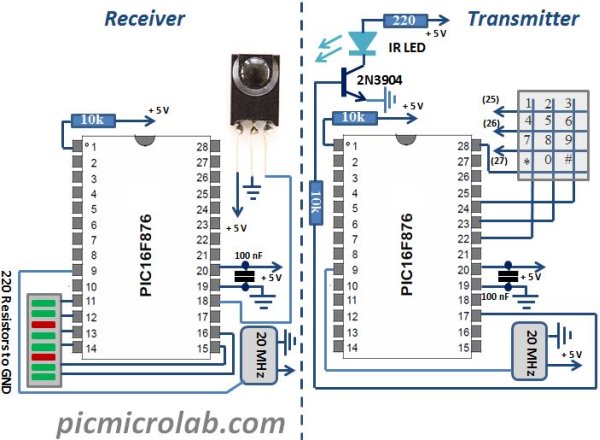 Further improvement can include upgrading both receiver and transmitter codes to use interrupt routines instead of pooling technique thus making it more efficient.

Introduction I have always been fascinated by photographs about lightnings. While it is relatively easily to put a lightning strike...