In this project, PIC 18F4550 is programmed to perform the function of an oscilloscope. Communication is set up between the computer and the PIC through USB, so that bulk data transfer mode is implemented. Analogue circuits are carefully designed so the user can select gain and offset on the computer screen and have the circuit perform the corresponding functions. Also software based calculations like FFT and cursor information can be displayed on the screen. It is also possible to copy and paste the plot to notepad directly. 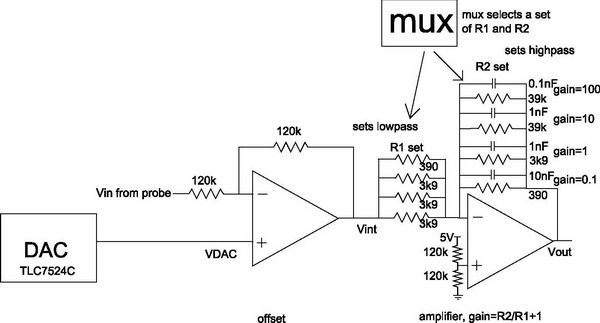 Hardware Design:
The goal of the hardware is to let the user select offset and gain from the computer user interface rather than twisting a little potentiometer. The design is shown in Graph 1 below. The computer enables the DAC and puts an 8-bit number onto the DAC data lines. The DAC output is sent to the “‘+”‘ input of the first op-amp, providing an offset.

he second op-amp sets up the gain stage. There are four sets of resistors. A multiplexer is used to select one set only at a given time. The value of R_1 and R_2 sets up the gain provided that the “‘+”‘ end is set at 2.5V. To mimic a real oscilloscope, we chose four options for the gain: 0.1, 1, 10, and 100. Capacitors that are parallel to the resistors right before the output stage set the high frequency cutoff of the circuit. The high frequency cutoff is set to be around 4kHz. This is lower than twice the fastest sampling frequency the circuit can perform, and thus eliminates aliasing problems. The schematic for the circuit is shown in Graph 2 below.

It is to be noted that this is the circuit for one oscilloscope probe. Since we have two channels, the same circuit is supposed to be repeated twice. However, due to mistakes made in a long soldering session, one of our TLC7524Cs got destroyed. Luckily, we had another DAC called AD558. It works a little differently than TLC7524C. The output range for AD558 is [0-2.56V] other than [0-5V]. An additional times 2 multiplier op-amp is added after AD558. The circuit is shown in Graph 3 and schematic in Graph 4 below. The bill of material for ordering from Farnell is attached as Graph 5 below.

Communications Protocol:
We are using the 8-bit configuration for the ADC inside the microcontroller, because it offers a good tradeoff between conversation time and resolution. 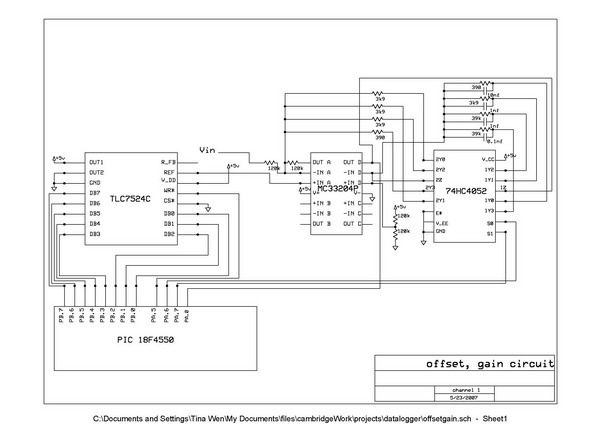 Firmware Design:
A flow chart for firmware can be found in Graph 6 below.

The hardware specification is shown in Table 1.