This project is a micro controller chess game. The objective has to be able to play chess on a VGA monitor, including an intelligent computer to play against. This all has been accomplished with a microcontroller.

I started this as a project for the college ( I am a Electrical Engineering student ), but it has grow way beyond that. Now it is a complete chess game with a video output, keyboard for user interface, audio for some sound effects, a clock, a temperature meter. All the code was written from scratch, so any questions about the code you can ask me. I took a lot of time to write all this down, and to make the video and audio routines. The code is all well commented (almost all in English) and modular, it shouldn’t be hard to understand.

The source code (attached as a RAR file) was all divided in simple modules, so it’s easy to debug and re-use. Some cool techniques where used in the routines that are worth a look. The division of the source code is as follows :

Each section of the code is explained in the next Steps of the instructable, the entire code is huge (108 pages) so i will just scrach the top of it. The routines are written in a non-blocking way, so adding more stuff it’s plain.

In the end i had a nice game, not so hard but funny.

Thanks to to my friend Igor for drawing the pieces for me (I suck in Paint).

For the hardware the main challenge is to select a processor with power to handle the audio and video, and still have enough power to run the chess engine. The most powerful micro that i had at hand was a DSPIC33F128MC804 from microchip, that i bought to start playing around with the DSPIC33F family. And this seemed a good project to do this.

I know that this micro was supposed to be used for motor control, it has all those nice peripherals and the DSP instruction , but let’s do not use this stuff now. The things that are interesting are the SPI module that can go up to 10MHz, 40 MIPS core, 8 DMA channels, 4 Output Compare modules, audio DAC.

The clock is run at 80MHz this makes the use of the full processor power, and also can be scaled to get a 10MHz clock for the SPI module this is necessary by the video routine. This clock rate is obtained by the PLL block in the DSPIC33F.

If i don’t know what is DMA its a feature that allows some peripherals to transfer memory  to or from the data memory without CPU intervention. (wiki reference)

So with the processor chosen the rest it’s straight forward.

The power supply has three output rails. A 5V regulated by a 7805, for the high voltage chips. A 3v3 rail powers the processor and the flash memory, to get 3v3 a LM317 is used just as described in the datasheet. The amplifier is connected to the unregulated supply because it needs the higher voltage to power the speaker.

I designed little modules to plug in a bread board  so they can be reused. All these modules are  in the project files.Some i have built in a pre drilled pcb so there are no files, but these are simple to be made. 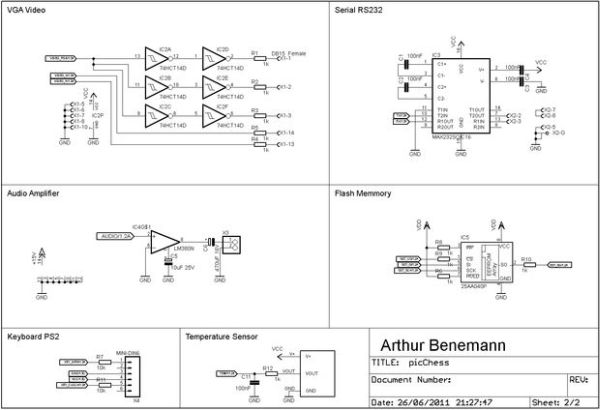 In the beginning of this step there are  pictures of the project mounted in my breadboard, the Schematic is also there, but the eagle files are in the project files.