This servo controller generates a signals to control a standard servo motor (I used a Futaba servo but you can use any servo) using the 12F675 microcontroller.  You can type a text command into a serial terminal e.g Hyperterminal to set the position of the servo.

The project software works slightly differently to the previous one as interrupts are used for pulse timing – this lets it both service the serial port input and generate the correctly timed servo pulse. 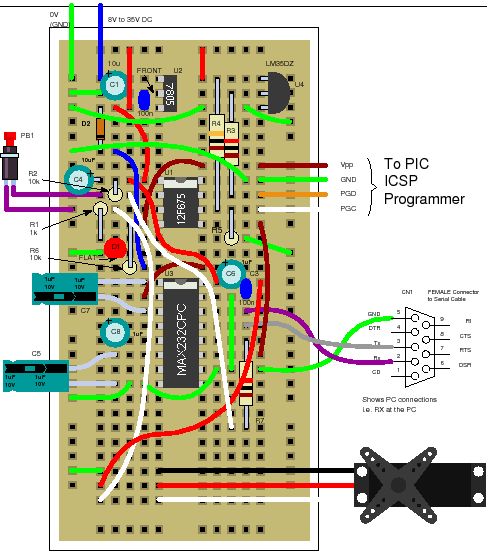 Note: The software limits the maximum values to 1.0ms and 2.0ms but you can change this in the software if you need to.

The project uses the same solderless breadboard as before but adds in a link from the serial port connector to the MAX232 transceiver (for receiving serial data) and a 1k resistor.

The servo controller only needs a single control line from the 12F675 and a serial input line from the PC serial port to send commands to the circuit.

Again the timing source is provided by the internal 4MHz clock .

Timer 0 interrupt is used in the same way as the previous tutorial and again generates the 20ms repeat rate for the servo controller.

Note: This project does nothing until you type in commands – it does continuously generate the servo position signal but this is only changed from the zero position when a new command is accepted.

The settings for Timer 0 are exactly the same as those used in Tutorial 6.

The most interesting part of the servo controller software is that it is doing two things at once – it uses a simple multitasking method that is suitable for use in a memory constrained device e.g. 12F675.

The software services two processes at once: