NOPPP is a simple programmer for PIC16C84, PIC16F83, and PIC16F84(A) microcontrollers. It attaches to the parallel port of a PC. Plans were published in Electronics Now Magazine, September, 1998, and are included in shorter form in the downloadable ZIP file.

An article about this programmer also appeared in Silicon Chip (Australia), March, 1999. Larry Fischer reports that he has programmed a PC16F628A with an unmodified NOPPP. He didn’t say what software he used.

Having problems learning to use MPLAB? See these brief notes (or these older ones) For further assistance contact Microchip; MPLAB is their product, not mine.

Although not precisely “no parts,” NOPPP is unusually simple and uses no hard-to-find parts. You can probably build it using parts you already have on hand. Here’s the circuit (revised somewhat from the original design, for greater reliability):

Pin numbers are those of the 25-pin connector on the PC.

Capacitors are in microfarads.

Circuit description: On the PIC, pin MCLR is +5V for normal operation (not used here), +12V for writing, and 0V for resetting. Crucially, the +12V supply does not actually “burn an EPROM” — the higher voltage is merely a signal to activate the internal flash memory programming circuit. It must be greater than 12.0 volts. The D0 output of from the PC controls this signal. No harm results from applying it at inopportune times.

The PIC communicates by means of a two-wire (plus ground) synchronous serial protocol. Pin B6 is the strobe signal; pulses on it tell the PIC when to accept or transmit each next bit of data. Pin B7 is both an input and an output. When the PIC is receiving from the PC, SLCTIN is held low and D2 does not conduct; D1 and R1 are effectively out of the circuit, and the PIC receives data from AUTOFD.

When the PIC is sending, SLCTIN and AUTOFD are high, D1 does not conduct, and D2 and R1 provide pull-up. Some additional pull-up is provided by R2 plus the pull-up resistor on AUTOFD inside the PC’s parallel port (nominally 4.7k, sometimes much lower in newer CMOS parallel ports). The PC reads the data on the BUSY pin, which is 0.6 volt higher than the output of the PIC because of D2. The PC parallel port has (or should have) CMOS or Schmitt inputs and should not require true TTL logic levels.

R2 and R3 help to reduce cable crosstalk by isolating the input capacitance of the PIC so that less current flows during sudden transitions. The PIC has Schmitt inputs and does not object to the resulting reduction in rise time. R4 protects the base of Q1.

Revised circuit: The circuit originally published in Electronics Now and software are quite reliable. However, for greater compatibility with a few PC parallel ports that had trouble with the original, I made some slight changes and additions: 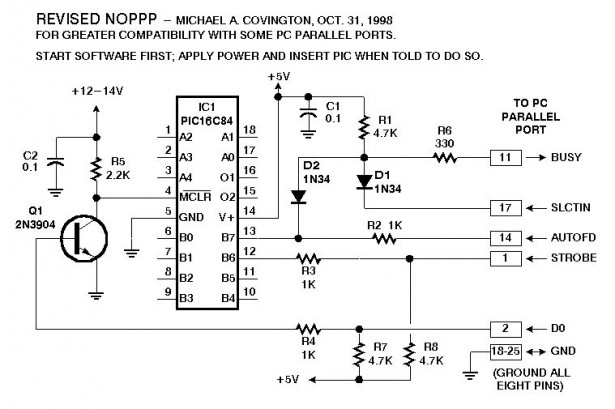 If you have the original circuit working, there is no need to make these changes. However, a very few PCs with nonstandard parallel ports or poor-quality cables benefit from them.

Is NOPPP available as a kit?

A simple kit based on NOPPP can be purchased from Oatley Electronics. The kit consists of a circuit board and parts. (Located in Australia, Oatley Electronics takes American credit cards and ships worldwide. Note that an Australian dollar is smaller than a U.S. dollar.)

A more elaborate kit, with power supply, enclosure, software disk, demonstration board, and manual, is now available from: