The Microchip PIC32 is based upon the MIPS32 M4K Core, a high performance core with 32 core registers that are each 32-bits. Microchip has extended the functionality of the M4K core with some unique proprietary enhancements, including an 8-word prefetch queue with branch prediction. The prefetch buffer can also be used as a mini-cache, to lock either four 32-bit instructions or eight 16-bit instructions, allowing small loops of code to achieve top speed execution. 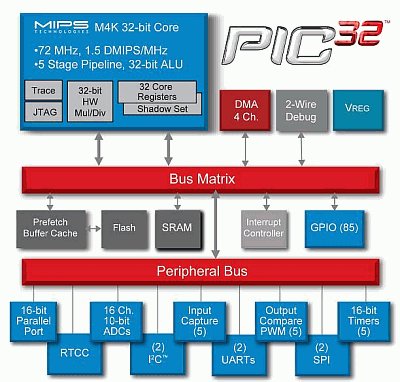 Microchip’s 16-bit shipments have quadrupled in the past two years, growing faster than their 8-bit business. Microchip’s PIC32 is targeted to further extend this growth. One reason why Microchip chose the MIPS M4K is that the architecture shares a close compatibility with Microchip’s existing 16-bit PIC24 and dsPIC microcontrollers, allowing Microchip’s customers to easily migrate existing 16-bit designs to the PIC32.

First members of the Microchip PIC32 32-bit MCU family have up to 512KBytes of Flash with 32KBytes of RAM.

The Microchip PIC32 core contains instructions for AND and OR of immediate data, allowing Bit Set and Bit Reset of multiple bits of a single register in one instruction. In addition, the PIC32 peripheral registers have enhancements for fast bit manipulation not found on the MIPS4K architecture.

According to Ganesh Moorthy, Executive Vice President of Microchip, “We now provide designers with the most compatible environment in the industry for developing systems with 8-, 16-, and 32-bit MCUs!”