You’ve probably seen various holiday or birthday cards that play a little jingle via beeps when they are opened. Last few years have brought new ones that play actual sampled music for a dozen seconds or so. I decided, for this new year’s celebration, to make a card that, when opened, will play a complete song in full fidelity. And the song it should play should be selected randomly each time of many. The project would be housed in a normal CD jewel case. The project was further complicated by the fact that it is impossible to predict shipping times during the holidays. Thus the task was to do all this, using nothing but whatever materials and components that I already had at home. I managed to do this successfully, and the project worked well. It is not the best designed or the most efficient, but it does work. 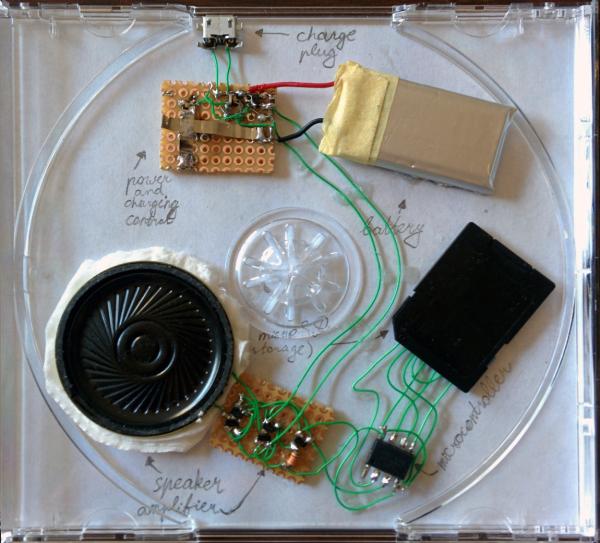 The first task was actual music playing. This is of course nothing new. I’ve done projects that play music using 8-bit microcontrollers before, as have many others. In this case the only microcontroller I had access to was an attiny85. This, initially, seemed like it would be enough, but actualy ended up being a limiting factor later on. The code is simple, as expected. One timer is clocked from the 64MHz PLL to produce a high-frequency PWM signal that we’ll use as analog output. Another timer is used to create the 32KHz sample clock. On sample interrupt, we take the next sample form the circular buffer and put in into the PWM duty cycle register. All the while, the main code is reading the file from the SD card, pausing only when the circular buffer is full. Thus music playback is realized.

Storage is provided by a microSD card. I used my SD driver from one of my other projects. The uFAT library was also used for basic read-only FAT16 access. The code enumerates all files whose extension is WAV and then randomly pickes one to play. It then collects the list of the card sectors that store that file and saves them in an array (up to 8 fragments per file are supported). File header is ignored, as are bytes in the last cluster that are not file bytes. This is not a real issue, however, since at 32KHz, the file header is merely 2.25ms long, and each sector of garbage at the end is merely 16ms. Neither is really perceptable.

Volume was not an immediate concern, but after the first prototype worked, it became one very quickly. The ATTiny can source/sink only about 20mA on a GPIO pin. And since it was running at 3.0V (at the time the power source was a set of two AAA batteries in series), the most power we could produce was 60mW. Not too loud at all. At this point, it was decided to add an amplifier. Luckily, the signal is digital, and so amplifying it is simple. I decided to use a full-bridge configuration of four MOSFETS with low on-resistance to get the +/-3V voltage swing to the speaker, with only 100-150 milli-ohm of series resistance. This means that now the power delivered to the 8-ohm speaker could be as high as 5.8W. Much louder. However, a problem lurked. To drive a full bridge one needs two complimentary signals, ideally with some dead time, due to MOSFETS having a non-zero switching time. I had no extra GPIO pins to use, so even ignoring the dead time, I had no complimentary drive signal. I decided to throw efficiency to the wind, and just make an inverter using an extra FET. This actually adds more delay, so in fact the two halves of the bridge will now stay both on for longer, wasting more power yet. Due to the contrainsts of the projects not allowing me to get a microcontroler with more pins, this was deemed acceptable. This was assembled on a small piece of protoboard, using some SMT parts I had around. It also worked wonderfuly! The speaker was now loud enough to be heard in the next room, and with no distortion too!

For my electrical engineering senior design project, I decided on designing a analog music synthesizer with MIDI control. I have...