I spent a good chunk of Saturday afternoon hanging out at the Homebrew Robotics Club booth at Maker Faire Bay area. They have a ton of really interesting robot builds on display and I just loved hearing about what went into these two in particular. 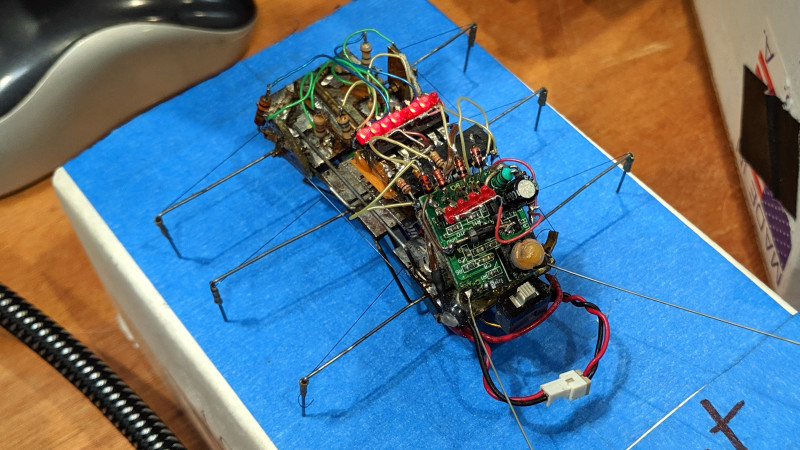 It’s obvious where BugBot gets its name. The six-legged walker is the creation of [Mark Johnston] who built the beast in a time where components for robots were much harder to come by. Each leg is driven by a very thin strand of muscle wire which contracts when high voltage is run through it. One of the really tricky parts of the build was finding a way to attach this wire. It has a very low melting point, so trying to solder it usually results in melting right through. His technique is to wrap the wire around the leg itself, then slide a small bit of brass tubing over it and make a crimp connection. 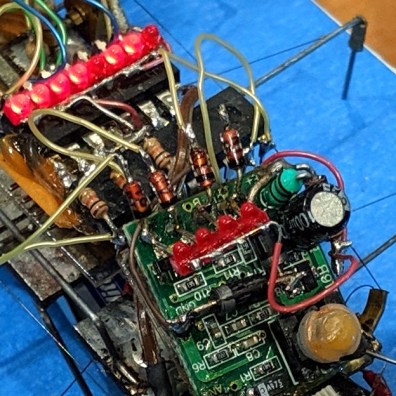 At the heart of the little bug is a PIC microcontroller that is point-to-point soldered to the rest of the components. This only caused real problems once, when Mark somehow bricked the chip and had to replace it. Look close and you’ll see there’s a lot of fiddly bits to work around to pull that off. As I said, robot building was more difficult before the explosion of components and breakout modules hit the scene. The wireless control components on this were actually salvaged out of children’s RC toys. They’re not great by any stretch of the imagination, but it was the best source at the time and it works! You can find a demo of the robot embedded after the jump.

READ  Internet of Things companies will dominate the 2020s: Prepare your resume! 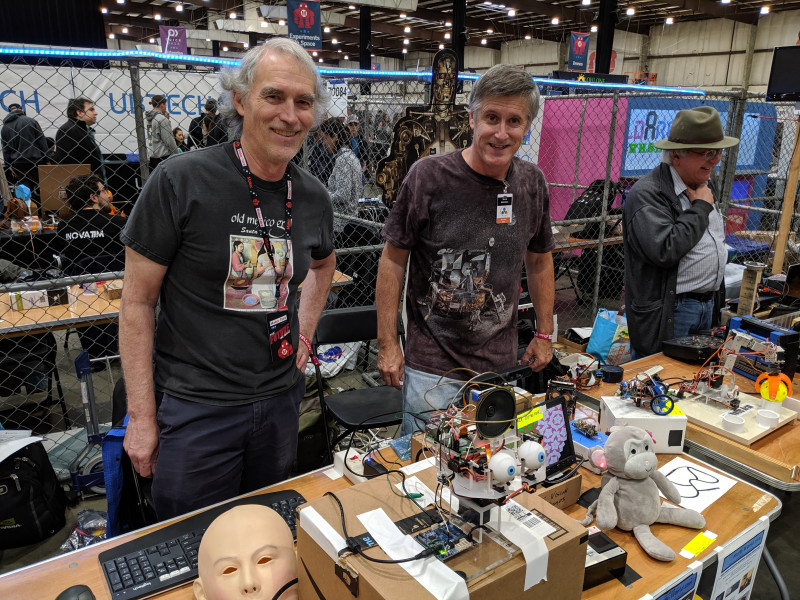 An Android robot was on display, but of course, I was most interested in seeing what was beneath the skin. In the image above you can see the mask sitting to the left of the “Pat” skeleton. Ralph Campbell has been working on this build, and plans to incorporate interactive features like facial recognition and gesture recognition to affect the gaze of the robot. 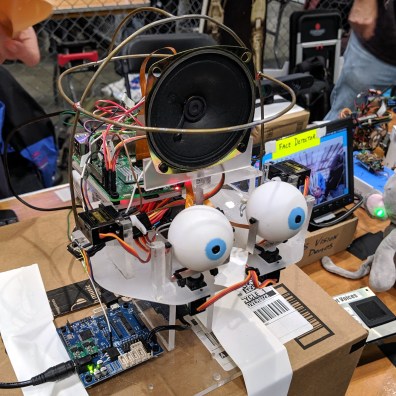 Inside each of the ping pong ball eyes is a Raspberry Pi camera (actually the Adafruit Spy Camera because of its small board size). Ralph has a separate demonstration for facial recognition that he’s in the process of incorporating. But for me, it was the mechanical design of the bot that I find fascinating.

The structure of the skull is coat hanger lashed and soldered together using magnet wires. The eyes move thanks to a clever frame made out of paper clips. The servos to the side of each eye move the gaze up and down, while a servo beneath the eye takes care of left and right. A wooden match stick performs double duty — keeping the camera in place as the pupil of the eye, and allowing it to pivot along the paperclip track of the vertical actuator. It’s as simple as it can be and I find it quite clever!

Since I’m on the topic of robots I want to give a shoutout to Hackaday’s own Roger Cheng. He was selected as a roaming exhibit for this year’s Maker Faire Bay Area. If you haven’t been following his Sawppy buildyou should be (20,000 people can’t be wrong)! 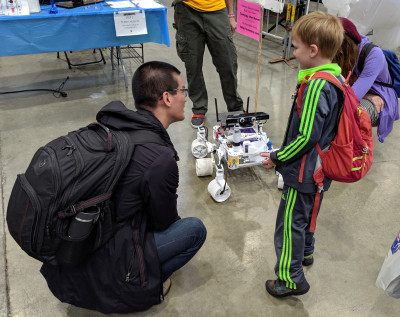 I thought this moment between Roger and a future robot builder was quite touching. To see a robot modeled after a Mars rover, driven wirelessly on Earth using the touchscreen of your smartphone, will surely have a big impact on what this boy thinks can be accomplished by one determined builder. Of course, it’s not just kids that Roger has been inspiring. This yellow rover was on display in one of the booths. It’s based on Roger’s design, as is this full-scale project that plans to use the platform as an arctic drilling test platform.

Source: MUSCLE WIRE BUGBOT AND A RASPBERRY PI ANDROID WITH ITS EYE ON YOU AT MAKER FAIRE

Version control is a system that records changes of a file or set of files over time so that you can...