My nephews got a Scalextric slot car racing circuit from Santa for Christmas. This was a blast-from-the-past for my brother and me and we were soon showing the kids how to race. However it quickly became apparent that “3-2-1-Go” wasn’t the best way to start a race so I put this together to simulate the gantry lights used for starting F1 motor races. 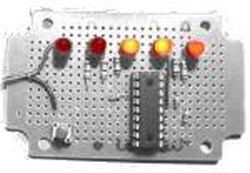 When the start button (SW2) is pressed all the LED’s turn off. They then illuminate sequentially at one second intervals until all five LED’s are on.  After a random interval between 0 and about 7 seconds the LED’s extinguish, signaling the start of the race.

Once the LED’s have extinguished simply press the start button again to initiate another  race start sequence.  While waiting for the start button to be pressed the PIC is put into a sleep state.  This drops the current consumption to around 10uA