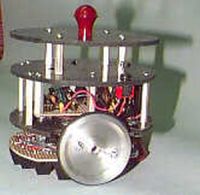 for full rotation and have had their controller boards removed to

convert them from servos to gear motors.

low cost, ready availability, standardized sizes and the fact that it

only requires 1 bit on your processor to control the motor.

very minimal with a finer control needed for this application. The

servo controller boards were then removed and the wires soldered

to the motor terminals and case ground. The motors were then

with only 2 processor bits per motor. This is implemented as one bit for

direction and another bit for power/speed control per motor.

detect if a line was present or not. The sensors chosen are the

QRB1114 from QT Optoelectronics and have a focal point of

about 1/4 inch. They are available from DIGI-KEY.

detection. This works but does not give the ability to follow

output fed to a processor bit. The transmitter LEDs are connected

to a 74HCT138 with a current limiting resistor to VCC. This allows

the entire array to use 4 bits for the sensors.