This post provides the code for interfacing 24LC64 EEPROM with PIC12F675 microcontroller. This 24LC64 EEPROM has i2c based interface and PIC12F675 doesn’t have any built in i2c modules, so software i2c module is created in the code. This code is written in C language using MPLAB with HI-TECH C compiler. You can download this code from the ‘Downloads‘ section at the bottom of this page. 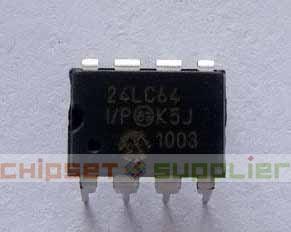 In the above circuit[1], GP4 pin is being used as SDA pin and GP5 pin is the SCK pin. Both of these pins are pulled up using 10K resistors as required for i2c protocol. 24LC64 EEPROM is the slave device, while PIC12F675 is configured to be the master. LCD is also attached with PIC12F675, just to show the values received from the EEPROM, otherwise it is not required in this circuit. Proteus provides an ‘I2C Debugger Tool‘ which is attached on the SDA and SCK pins in the above circuit, this debugger shows all the activity on i2c bus[2]. It is attached in the circuit just for debugging purposes. 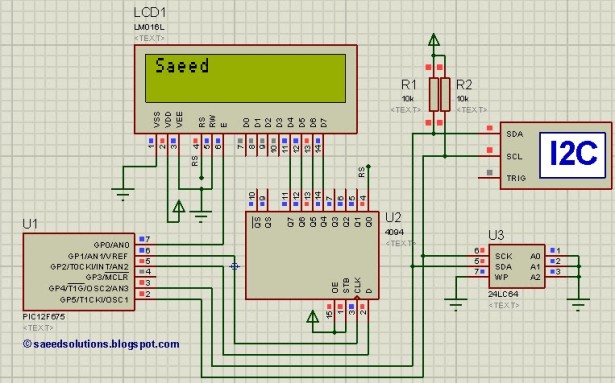 Write_Page_To_24LC64_EEPROM(0x0020, TxArray, 4); function writes 4 bytes present in the TxArray starting from address 0x0020. And Read_Bytes_From_24LC64_EEPROM(0x0020, RxArray, 4); function  reads 4 bytes from the starting address of 0x0020 and saves these bytes in RxArray. In the end all of these 5 received bytes are displayed on the LCD. You can verify from Figure 1, that all of these bytes were correctly received and displayed on the LCD. Using these simple read and write functions you can easily interface 24LC64 EEPROM with PIC12F675.

24LC64 EEPROM interfacing with PIC12F675 code was compiled in MPLAB v8.85 with HI-TECH C v9.83 compiler and simulation was made in Proteus v7.10. To download code and Proteus simulation click here.

For more detail: Interfacing of PIC12F675 with (i2c based) 24LC64 EEPROM (code and Proteus simulation)