A breadboard can be also made at home, from one side, it will be more expensive than those on the markets, but for another side, it’s possible to add commonly used elements, like LEDs, switches, or other things, for example I added a precision IC socket that makes putting in and out of ICs much easier. Choosing what to put there is a bit like a making homemade pizza, one can put anything he likes (and what he has currently in the fridge).

I didn’t have ready to use female sockets, so I cut in half old DIP-18 sockets – works OK too. 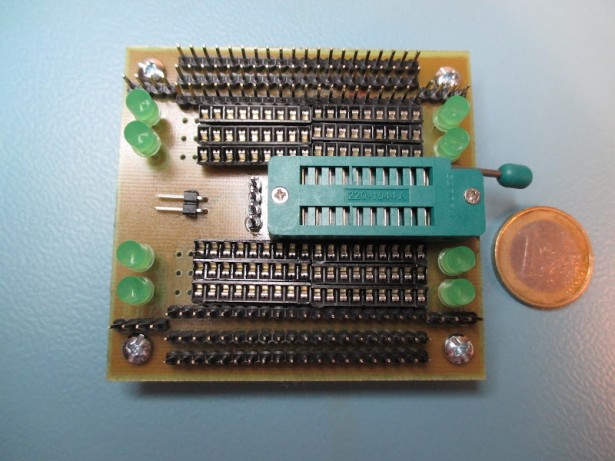 The bottom layer was coated with Lichtenberg’s alloy – that’s a really nice and easy way to protected traces, I highly recommend it! It’s inexpensive too!

The circuit looks like a monster, but there isn’t a lot of logic in it, in fact, there’re only sockets, and a couple of LEDs – I didn’t want to add more components, at least with this version. The connections are the same to those of the market breadboards.

READ  Timers of PIC microcontroller How to generate delay
‹ Previous Next ›

Solder stencils are pretty cheap these days, but for a single, quick production run of a really simple design, it seems like...