– The Gertbot brings electric power to your computers. It has four channels each capable of driving 30 Volts and 2.5A. It can drive capacitive or inductive loads. Besides the four H-bridges the boards also has two open drain N-MOSFETS which can sink 3A at 30Volt. 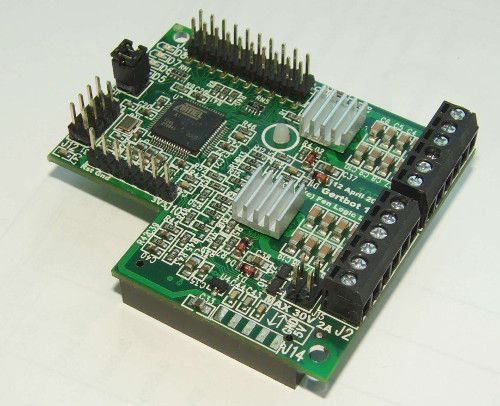 – The primary target is driving motors. Stepper motors, brushed motors and other robotics, however it can just as well be used to control other equipment where a lot of electrical power is required. For example one channel can drive 10.000 LEDS. Use three channels for RGB and combine that with the build-in PWM controller: you have mood lighting for a whole building. Anything which requires between 8 and 30V and up to 10Amp it can drive it! Altough the board plugs on top of a Raspberry-Pi it can also be used standalone and controlled from Windows or any other computer with a serial port.

– The board comes with a lot of software all of it provided with full source code. It has a debug and control GUI which runs under Linux or Windows. It has C-drivers, Python drivers and numerous example programs. But you can also control the board without programming. See the video on the examples page.

– There is a micro controller which takes care of the signal timing, thus leaving your computer free to work on other things. PWM from 10Hz to 10KHz. Precise signal generation for stepper motors as slow as one step every 16 seconds, or as fast as 5000 steps per second. There are inputs which can be connected to switches which stop your motor, without any help from the Raspberry-Pi. It is all taken care of.

Description Schaer is a generic programmer circuit capable of uploading and downloading firmware to/from several electronic devices like microcontrollers and eeproms. This and...