Even your PCBs can look professionally


Manual intervention to a PCB is usually always visible. With modern „No-clean“ fluxes it´s not that obvious as in the past. But still it doesn´t make resulting look of a PCB better. However, probably more important is the fact, that soldering residues are a potential risk, especially in humid environment – as they may cause a corrosion and leakage currents. 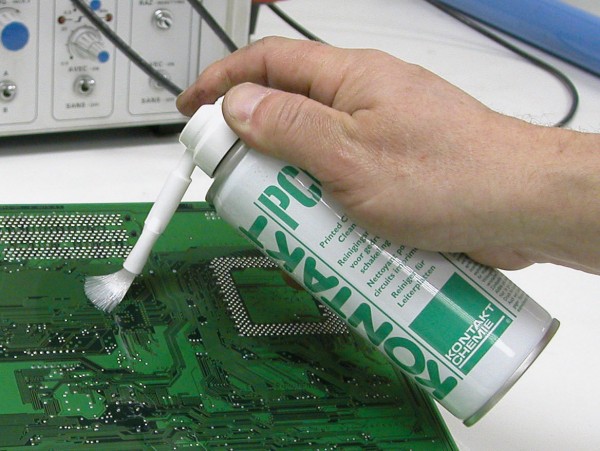 A PCB can be cleaned by various solvents (often also ecological ones – water based), but some residues are often simply too persistent … That´s why we need a solvent, which is relatively “as strong as possible, but safe for solder resist, marking and components with plastic packages at the same time.
Spray Kontakt PCC is developed specially for these purposes, what´s raised by a fact, that it´s equipped by application brush, helpful for a fast dissolving of thick layers. To maintain ESD safety, it´s necessary to moisten the brush by short pressing the valve before touching a PCB.

Kontakt PCC dissolves all types of fluxes without leaving residues. When cleaning thick layers, it´s necessary to wipe wet board with a paper tissue or similar. In result we gain perfectly clean PCBs resistant to leakage currents formation. Naturally, to obtain a long-term protection it´s advisable to use some of protective coatings like for example Plastik 70, Urethan 71 or Silisol 73 and other. Thanks to a strong effect, Kontakt PCC is also suitable for cleaning of various connectors, sockets, contacts, comutators of electric motors, ..

For more detail: Even your PCBs can look professionally

READ  Guidelines for reading an optocoupler datasheet
‹ Previous Next ›

USB Power supply Active Load Tester or short PAL Tester is unit designed for testing the quality of the power...